Do’s and Don’ts for your First Comic Con Costume 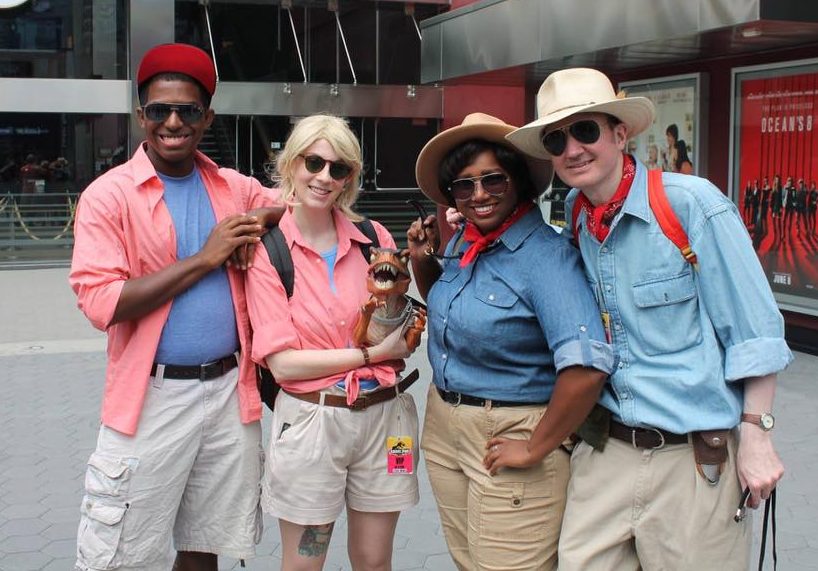 We’ll be sharing ideas for your first comic con costume and some more advanced cosplays too.

First, here some Do’s and Don’ts for Comic Con Costumes.

Don’t buy a Halloween store costume as your comic con costume. These costumes are very cheap and sometimes sewn into one piece which makes it hard to get on and off.

Don’t feel you must have a costume to go to a comic con or convention. On the contrary, its a fraction of people who are in costume at most sci-fi and fantasy events. If you prefer, just go and check out how the whole thing works the first time.

Don’t be overly perfectionistic creating your costume. Cosplay is supposed to be fun! You’ll soon realize there are people who have been making cosplays for years and have a lot of skill as well as larger budgets. Remind yourself that you have to start somewhere. In life and cosplay, the secret to success in most things is practice!

Don’t forget to test your makeup and hair ahead of time. Do a makeup test on a small patch of skin (not your face) to make sure you aren’t allergic to the makeup. Doing a cosplay such as Gamora from Guardians of the Galaxy? Seal that make up! Then seal it again to make sure it doesn’t transfer to your costume, bag, or other people.

Maybe don’t choose a costume that involves extensive face makeup. Apart from taking a long time to apply, makeup can be uncomfortable and fragile. It takes dedication to preserve a full green face for an entire day. It can itch. It can be hot. It can smear. When you scratch the itch on your cheek, you have to touch-up the makeup. At least try it out before you commit to your planned costume. Masks have their own problems, but at least they are relatively easy to remove and replace when you need a break.

Don’t pick a cosplay costume because someone asks you to or because you think it might be popular. Matching or paired costume are popular, but you have to say “no” if you want to. Creating a costume is a lot more fun if it’s one you are into! 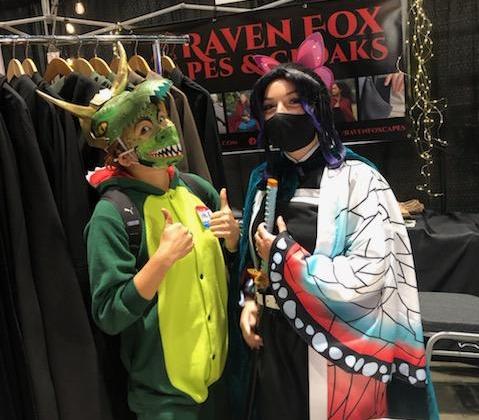 Do wear comfortable shoes. These conventions require a lot of walking, so either create a costume with comfortable footwear or bring a change of shoes (to keep in your car or backpack.)

Do wear a sci-fi or fantasy theme tee-shirt if you aren’t wearing a costume. Wearing a favorite themed tee-shirt will help you feel in the spirit of the Comic Con and can be the start of conversations or even friendships.

Do know its fine to buy a costume or costumes pieces like a hat, cloak, or other accessory as part of your costume. It doesn’t have to be all homemade. Or consider buying homemade pieces at the comic con or on Etsy to support makers. (See more about handmade vs. purchased below.)

Do read the rules of the Comic Con or Convention. Some Cons have rules about the size of accessories or regarding weapons. Expect any prop weapons to be inspected at the entrance. Real metal swords — or anything that can actually cause harm — will not be allowed. Some conventions will place a sticker or tag on prop weapons to show they’ve been inspected and are safe.

Do bring a change of clothes, in case you get sick of wearing a costume, uncomfortable, or it tears. You can keep the extra clothes in the hotel, car, or a backpack.

Do consider wearing a fantasy cloak if you think you might want to be able to cover your costume part of the time. I’m thinking about the parking lot, public transportation, lunch or the bathroom line. 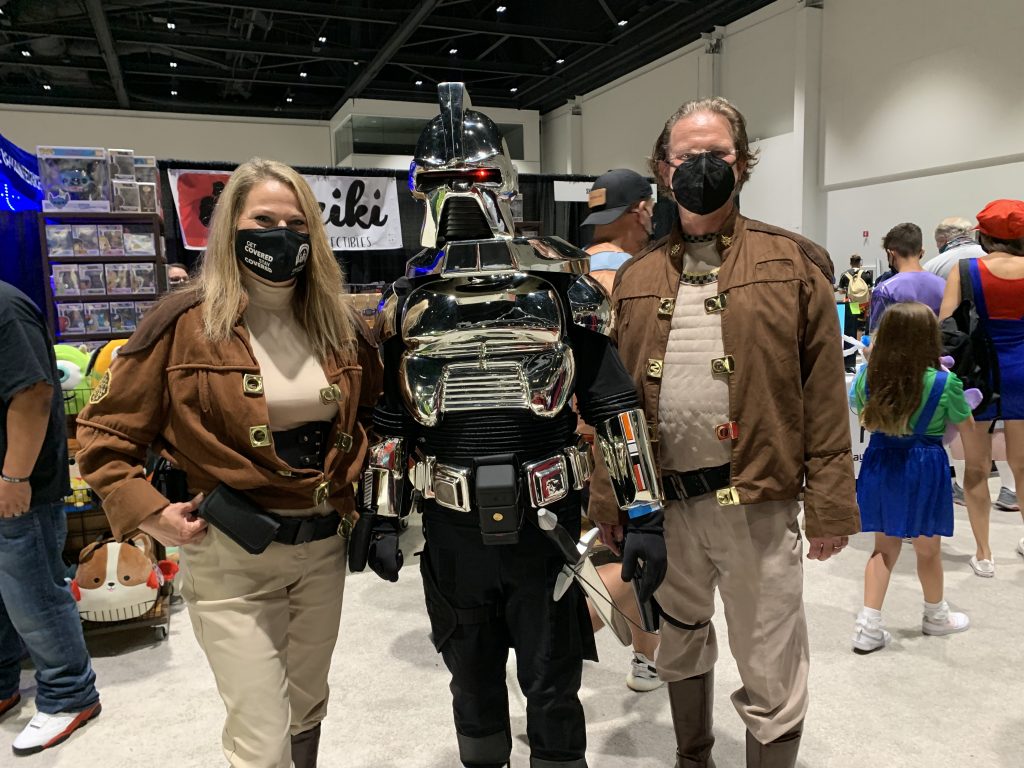 Do have a reliable spotter accompany you if you’re wearing something that restricts your vision. One of my friends owns a Cylon costume from original Battlestar Galactica. He can’t see and can barely move. Furthermore, everyone wants to take a pic with him, even though they don’t know this cosplay from 1978 🙂 Thus, a friend has to help him get around. Also, he typically attends Comic Con one day in costume and one day as a “normal” person so he can take in the event.

Here we’ll focus on costumes that use regular clothing, also known as closet costumes! In addition to your closet, many people shop their local thrift shop. You can also borrow from your friends’ closet or borrow or receive items from a Buy Nothing group. Don’t forget about Etsy and Thredup either.

By the way, this summer two fun choices are Jurassic World and Stranger Things. I see a lot of people cosplaying both on Instagram.

So yeah, easy and low-budget. 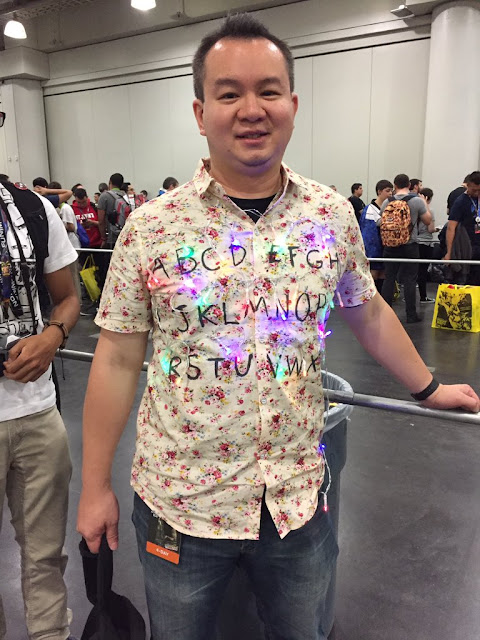 Couple of Things You Need to Know about Comic Con Costumes:

1. I’m obligated to let you know there is controversy about purchased vs. homemade costumes.

Many cosplayers will say it’s OK to buy a quality cosplay costume. And many people buy parts of their cosplays. We all know many people don’t sew, right?

However, there are others who say it’s not OK, and that cosplay IS about making costumes. Any costume contest or judging will likely ask if a costume is homemade — homemade costumes have a huge advantage in contests. But there is a lot more to enjoying an event like this than winning a costume contest.

There’s nothing you can do about this controversy, it just is what it is! Just be aware that people have their opinions.

2. In good news, nowadays there’s a gender bending option as well as a cross-dressing option.

The gender bending option is where a costume is adapted to the opposite gender of the original character. So you’ll see female hobbits, female Batman, female Captain America, etc. with costumes that have been adapted to look more feminine. Likewise a man could adapt Scarlet Witch or Poison Ivy to be a male character with a masculine-styled version of the costume.

The cross-dressing option is simply when, for example, a woman dresses as Jack Sparrow or Professor Snape or Edward Scissorhands without adapting the costume to look feminine, or a man dresses like the Scarlet Witch with a costume that matches one from the MCU without stylistic modification. 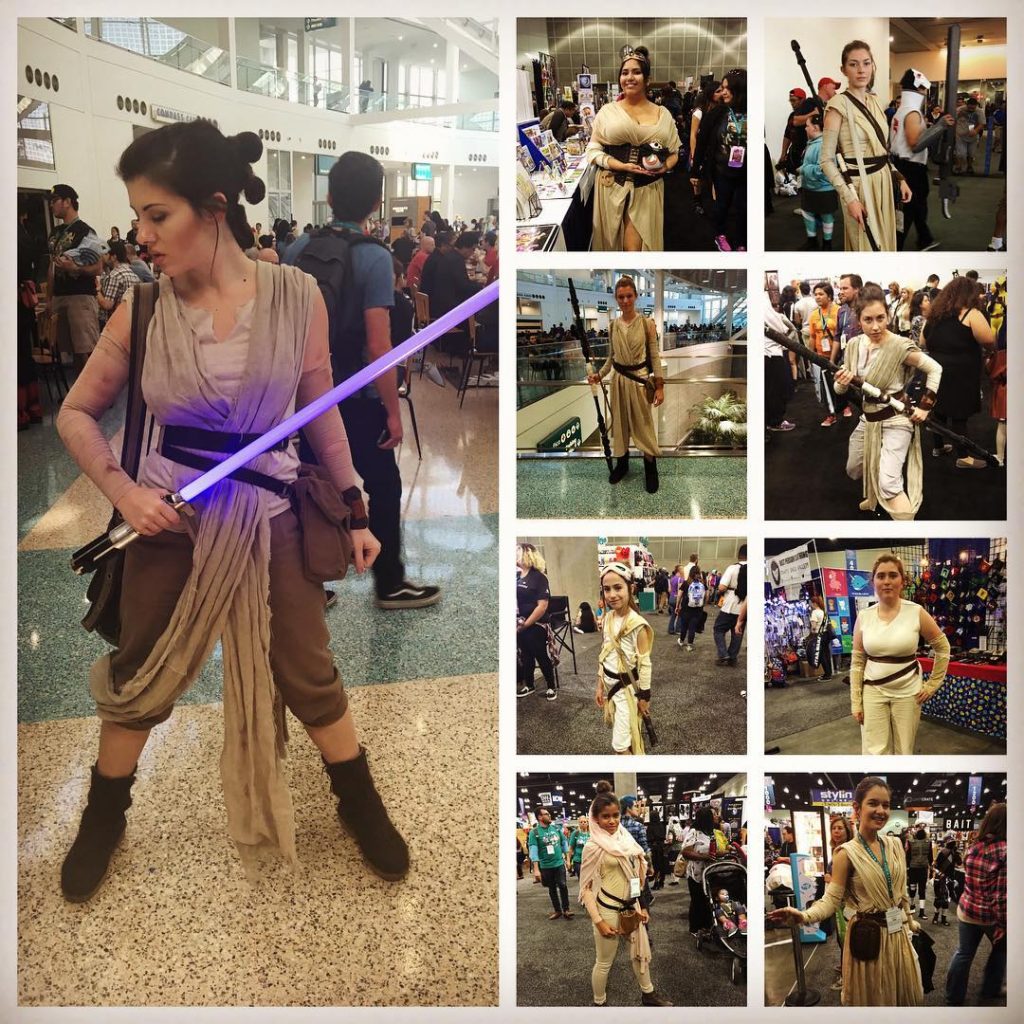 You can cosplay any movie, comic, anime, TV or Netflix series you like.

This list covers the most popular comic con costume ideas to help you get your ideas flowing. I’ve added in a few of my personal favorites as well. 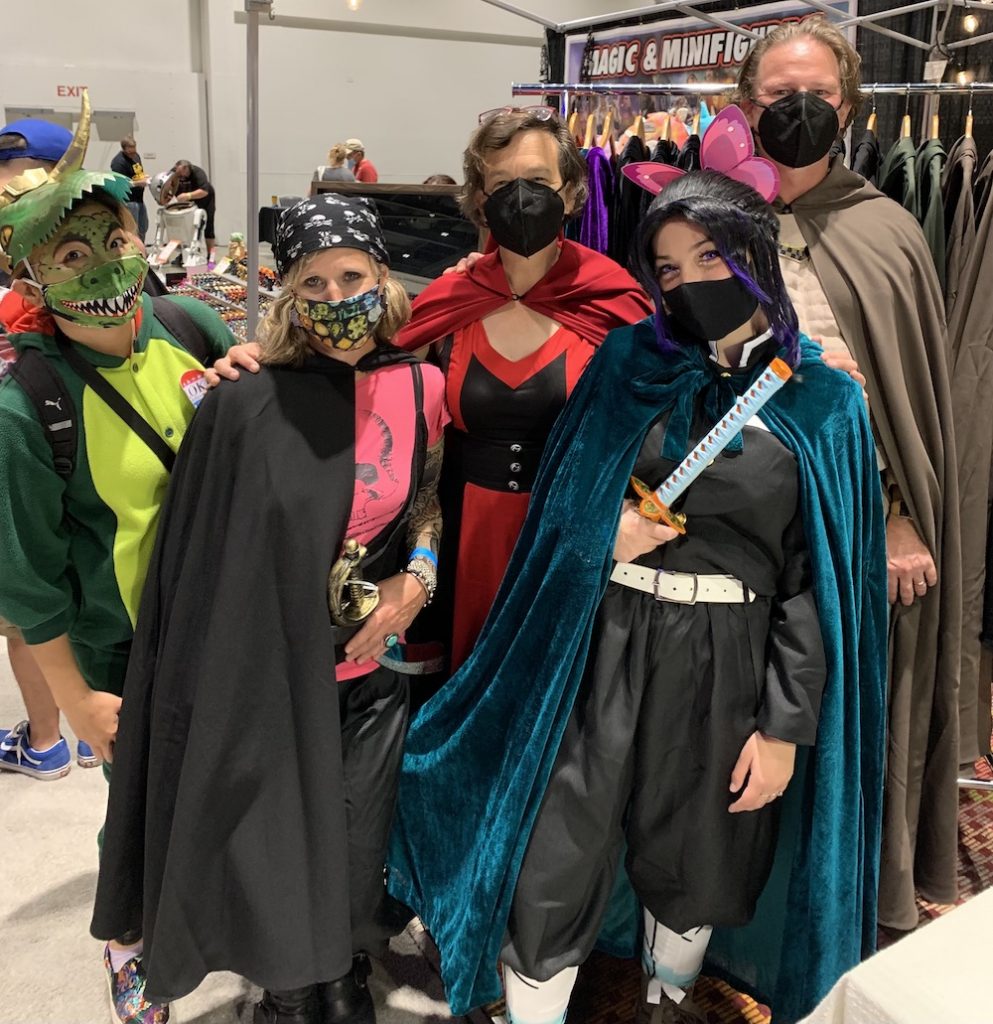 Important: Comic Con Etiquette or Things to Know For Your First Comic Con

1. Do not touch cosplayers. Apparently, this is a common problem so please take this request seriously!
2. Ask if you can take a photo of cosplayers or ask if you can take a photo with them.
3. And don’t approach cosplayers who are eating, or waiting for the bathroom!
4. Don’t block the aisles or hallways — some times people talk to their friends in the aisles or check their phones in the aisles.
5. Bring a collection of small things, like water, a power bar, cash, and make up. You might also want a sewing repair kit, sunscreen, hat, an extra face mask, a sharpie and notebook for autographs, etc.

If you have more beginner or closet comic con costume ideas, please add them to the comments.