Who is in The Rings of Power cast? And can we expect Hobbits? 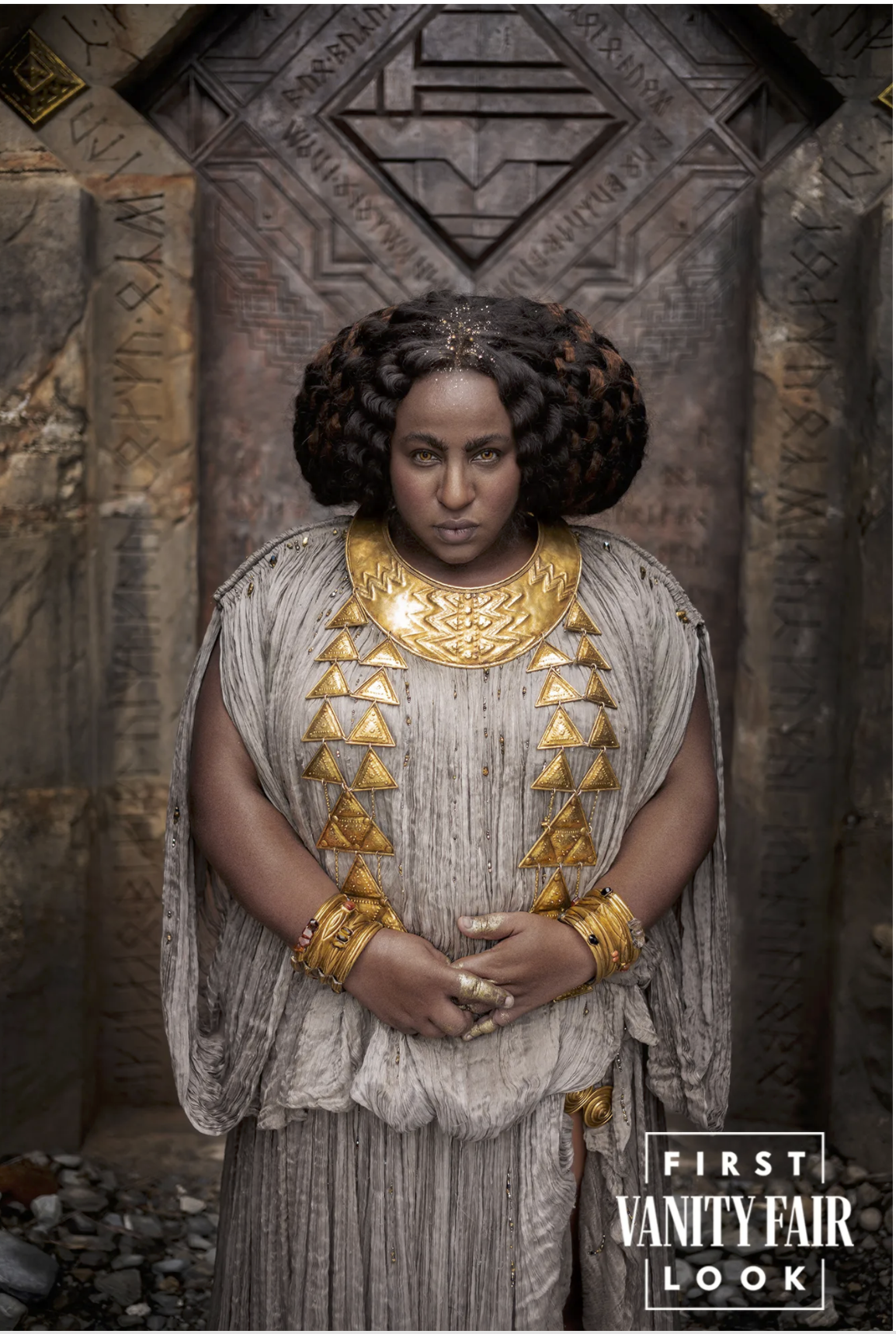 The Rings of Power cast and characters have stirred up some controversies among fans. I guess anytime you are talking about Tolkien people are gonna disagree. I’m not picking sides on this one — you can draw your own opinions. Also, there are mild spoilers here – nothing that hasn’t been released in the trailers or press – but if you wish to experience the series completely fresh, you might return this post after the series has begun.

If you saw the Power trailer, you know that younger versions of two key (and beloved) elven characters from the LOTR trilogy — Galadriel (Morfydd Clark) and Elrond (Robert Aramayo) are in the new Rings of Power series. There are also brand new characters created by the series’ writers. These new characters include a Dwarf princess, Disa (Sophia Nomvete), wife of Durin in Khazad-dûm (AKA “Moria”), and an elf named Arrondir (Ismael Cruz Córdova). More about them below.

Here’s The Rings of Power Cast List according to the public releases.

Vanity Fair’s “first look” (2019) told us that Morfydd Clark had been cast as Galadriel and brought us the first image we are sharing here. However, IMDB lists Clark as only appearing in the first two episodes of the series. It’s hard to surmise what this means, but perhaps the series moves to the different regions and leave Galadriel behind. It’s hard to believe she won’t appear again in the series considering her possession of one of th rings of power. Elves are of course immortal, and in the era that the series takes place, Galadriel is already likely over 2,000 years old.

It might be Clark’s voice reciting Galadriel’s famous lines from LOTR in the power trailer. If so, that’s a nice callback to the movies. 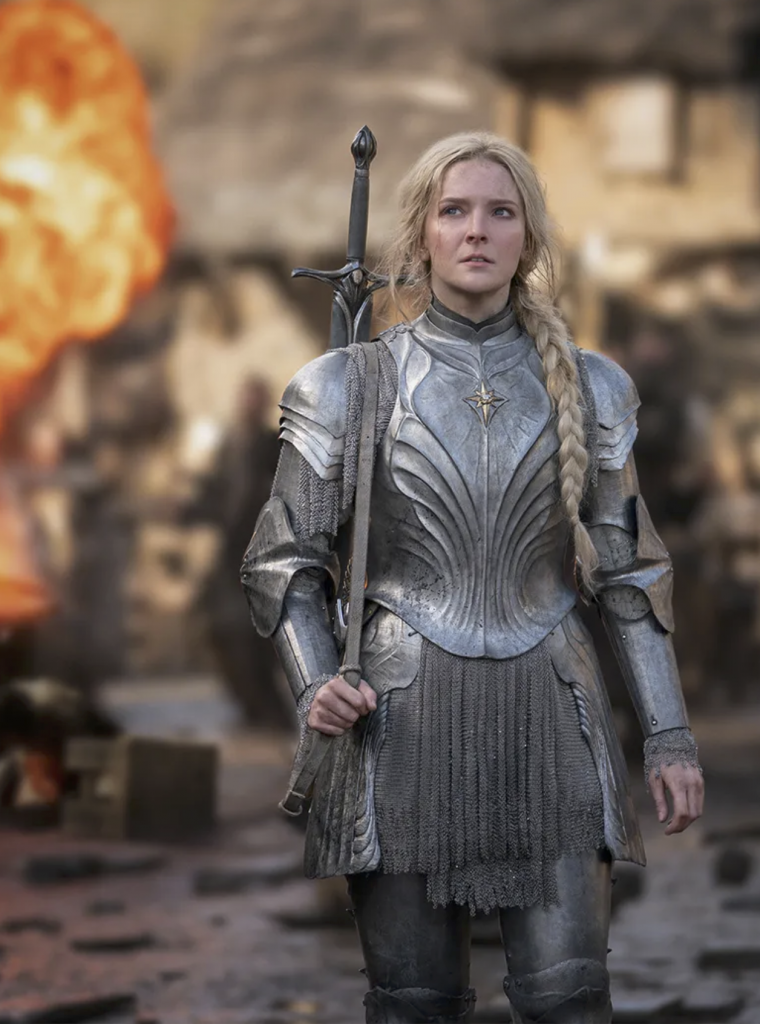 Interestingly, the series includes a younger version of Elrond than what appears in the novels and movies. The character must be over 1,500 years old according to the LOTR timeline. The character’s name at the start of the series is “Beldor” and appears as an ambitious political leader who later secures his position as the Lord of Rivendell. Elrond’s name change as an adult does not come from any known Tolkein source, so it’s not clear that it will be covered in the series (though, seriously, why else have the name change). Aramayo has experience in a fantasy series, having appeared in Game of Thrones as the young Ned Stark. 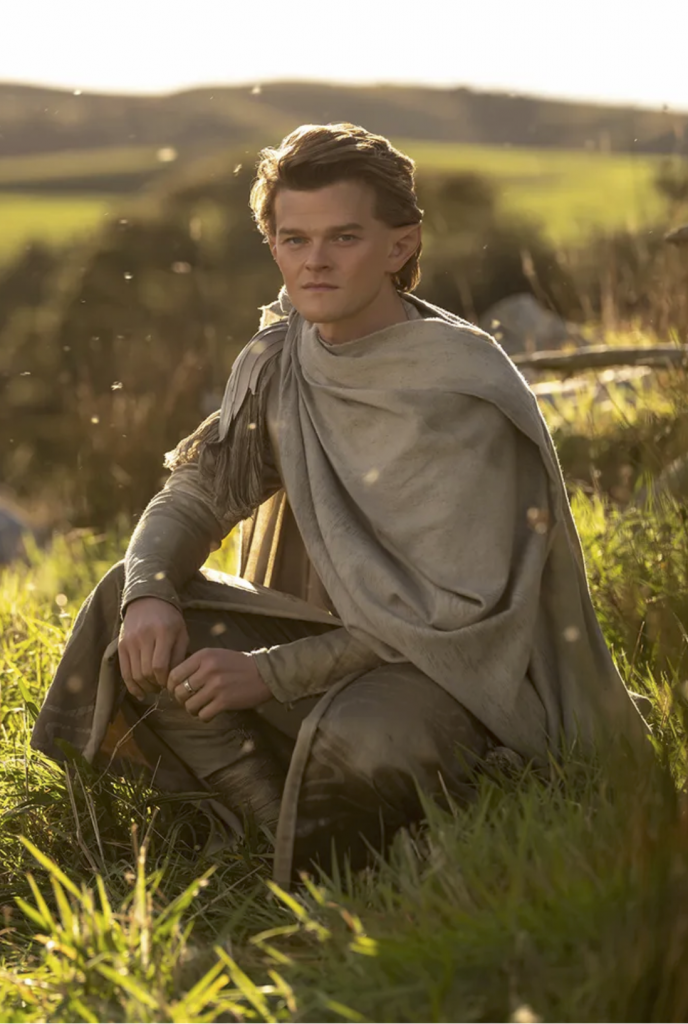 Prince Durin IV over time becomes the King of the Dwarves and Khazad-dûm, the great underground kingdom of Dwarves. Importantly, he leads his Dwarf Army to help the Elves and men defeat Sauron in the War of the Last Alliance! Owain Arthur will be playing Prince Durin IV. Seeing Khazad-dûm at the height of its glory is something to look forward to in the series. 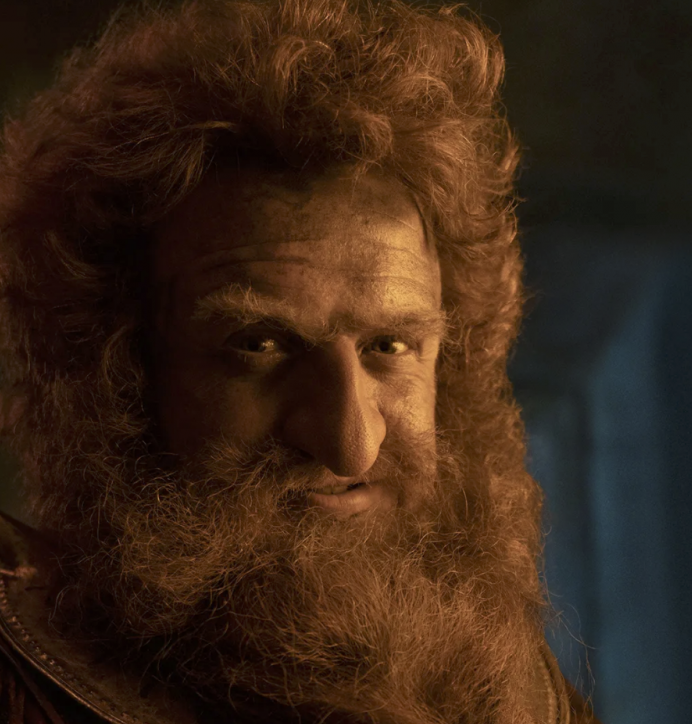 One of the new The Rings of Power cast and characters is Dwarf princess Disa played by Sophia Nomvete. Disa happens to be the wife of Durin. Those familiar with the LOTR movies will likely be confused by Disa’s appearance. Gimli famously says that dwarf women have beards and are often confused for dwarf men. Apart from the fact that it may have been difficult to find a female actress anxious to depict a bearded princess (or queen), Tolkien writings are actually ambiguous on this point. Dwarf women having beards appears in early writings, but Tolkien later implies they don’t (or at least may not) have them. Either way, Disa looks stunning. 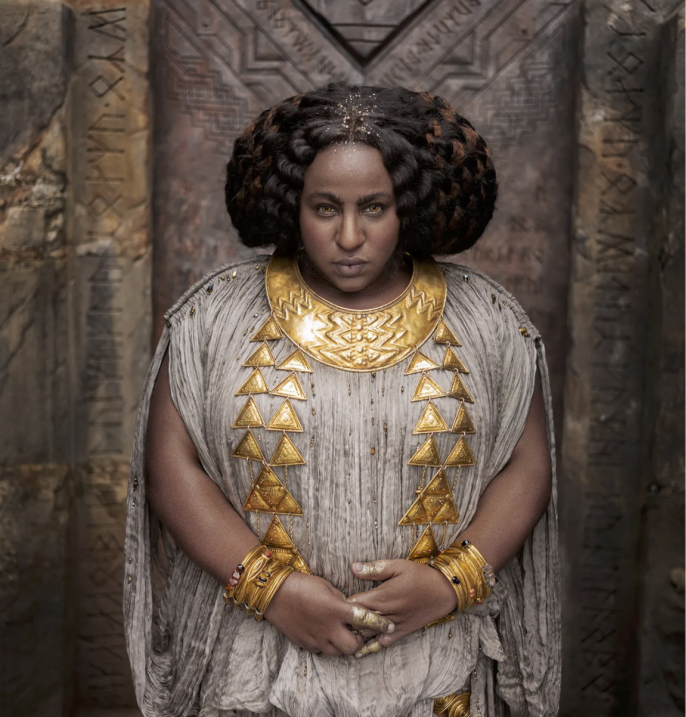 A second brand new series character is the silvan Elf Arondir played by Ismael Cruz Córdova. Silvan Elves settled in Lothlórien and The Woodland Realm of Mirkwood, the endless forests east of the Misty Mountains.

Note Arondir’s wooden breast plate carved with Green Man imagery! This detail suggests that Arondir is a Silvan Elf from Mirkwood and might be connected to Thranduil and his son, Legolas. We definitely know that Arondir has a secret relationship a human named Bronwyn, another of the new characters in the power series. 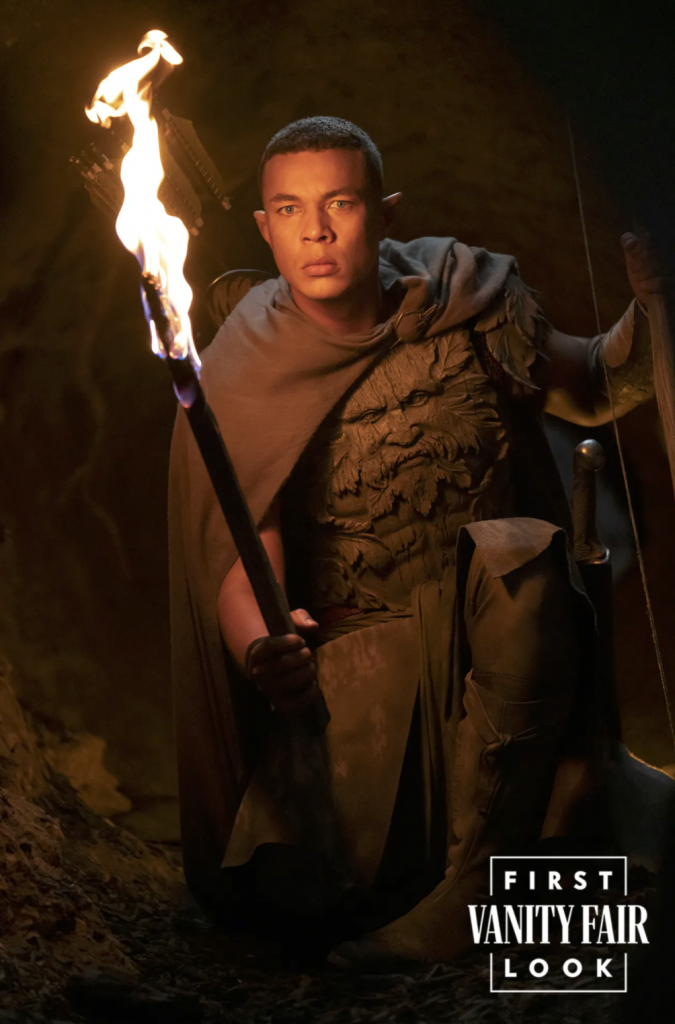 Mystery surrounds Bronwyn, another new member of The Rings of Power cast created for the series who is played by Nazanin Boniadi. Here’s what we do know about her from the Vanity Fair article. She is a human who works as a healer in her own apothecary. She has a child she’s raising on her own and is in a a forbidden relationship with Arondir. Additionally, it is known she’s from the Southlands, but the specifics are vague on that. Does that mean Rohirrim or Harad or someplace else? 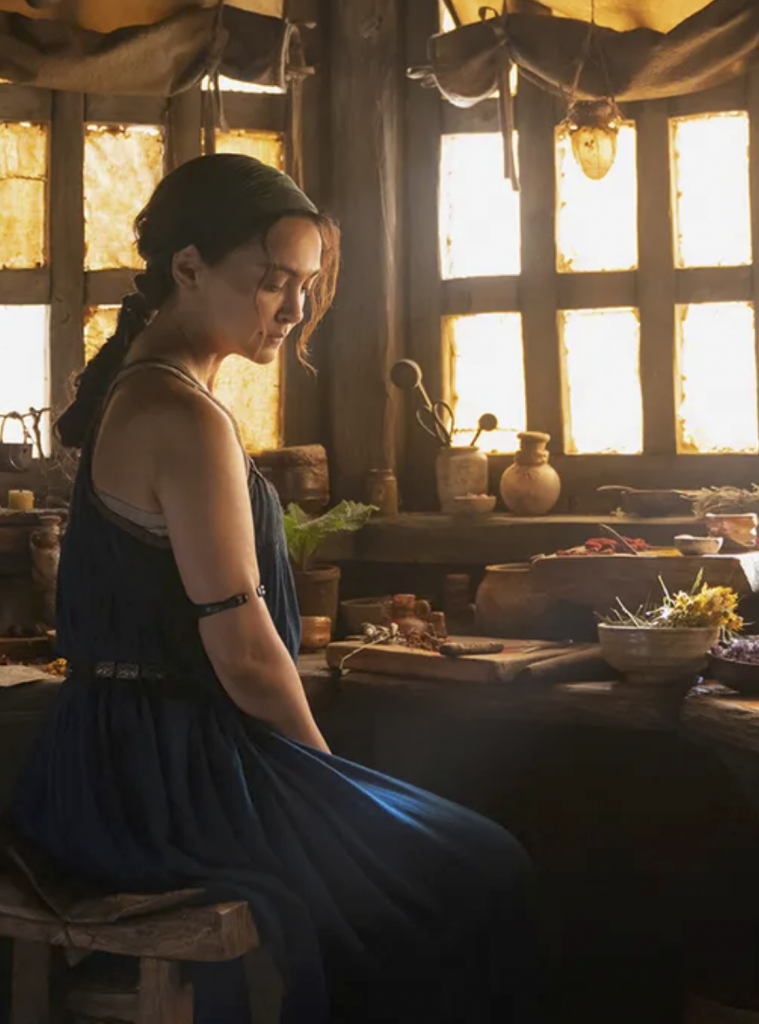 There are still more new characters in the power series. Charlie Vickers plays a mysterious man named Halbrand. He is a mortal man and a “fugitive from his own past”. That’s really all we know. We’ll have for to watch the Rings of Power to know what he is running from or how do Halbrand and Galadriel become castaways. 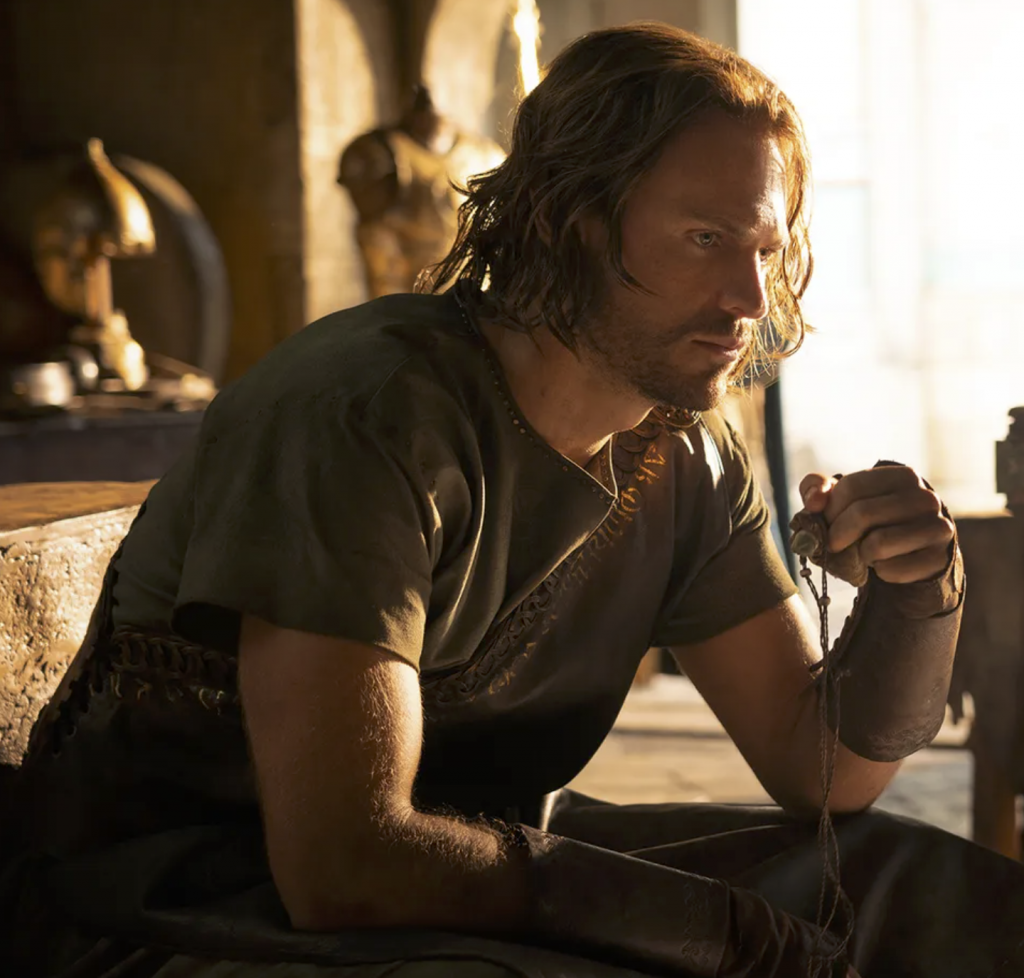 Joining the list of The Rings of Power cast members is Benjamin Walker as the High King Gil-galad. In the Tolkien trilogy, Gil-galad was the last High King of the Ñoldor Elves. He’s highly important in Elven history for a number of reasons, including battling Sauron with Elendil in the Last Alliance of Elves and Men. He appears in the Peter Jackson movies during the flashback to the battle, but it is only a quick flash. It will be exciting to see the character fleshed out more in the series.

Here’s a little more about how High King Gil-galad fits into The Rings of Power story. There will be three high-ranking Elves in the series, Gil-galad, Celebrimbor and Ciridan the Shipwright, the oldest Elf in Middle-earth. Movie critics believe Galadriel will be the main protagonist and Elrond and Galadriel will both play central roles in the store. However, both will be (relatively) young and therefore, it is likely that these wise and strong Elves might be the main leaders in The Rings of Power.

Daniel Wayman is The Stranger

Daniel Wayman is confirmed to play the mysterious stranger whose origins will be “one of the show’s most enticing enigmas!” This screen shot below from the power trailer is the subject of a lot of speculations from Tolkien followers and fans. There is a bearded man who looks like Wayman and a young harfoot who might be pulling him from the fire. Some ask if The Stranger might be Gandalf? And if this is why Gandalf and the Hobbits have a close affinity? 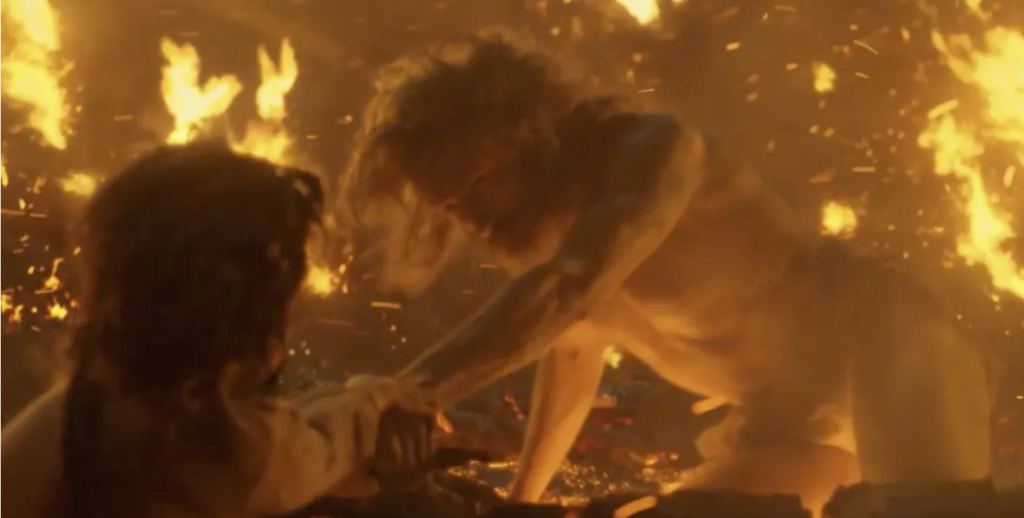 Tragic prince Isildur will be played by Maxim Baldry! Of course, Isildur sees his father Elendil die, but then defeats Sauron only to fall under the control of the One Ring and be killed by Orcs. Now perhaps we’ll learn the story of Isildur and his family before the storyline with Sauron, so many storylines are possible! Isildur’s inclusion suggests the scope of the series will be epic, as Isildur is born 1,500 after the rings are forged. Of course, it’s also possible the series will alter the timeline.

Elven smith Celebrimbor shall be played by Charles Edwards. As mentioned before, Celebrimbor is a key character in Tolkien mythology and as Elf master smith works closely with Sauron (who is in disguise) to create the rings of power. He also grows suspicious of Sauron’s motives and privately forges the three Elf rings. He then secretly sends them to Galadriel and Gil-Galad to keep them out of Sauron’s hands. Celebrimbor certainly has the potential to play a key role in the series. By protecting the three rings from Sauron’s influence, and getting them safely to the Elf leaders, he certainly plays a key role in the history of Middle Earth and the downfall of Sauron.

A couple of villainous character in the power cast: Simon Merrells is a character called “Trevyn,” and Joseph Mawle is “Oren.”

Will the Power Series Have Hobbits? Not Hobbits, but Harfoots

While there won’t be hobbits (I’ll explain momentarily), viewers can expect delightful harfoots, a hobbit ancestor.

Tolkien readers know that hobbits aren’t mentioned as existing or not existing in the appendices nor the Silmarillion. Tolkien did write about three different Hobbit types: The Harfoots, the Stoors, and the Fallohides. Of the three, Harfoots were the most numerous, and were typically smaller than the Stoors and Fallohides.  They also were beardless and had darker of skin. Additionally, the Harfoots were known for being friendly with the dwarves and took to living in burrows and smials as they loved hillsides. When hobbits eventually settled in The Shire, the majority of them were Harfoots. And in case you’re wondering, no Smeagol was not a Harfoot. Sources indicate he was a Stoor when he discovered the Ring and began his life of solitude.

The harfoot society of the power series was created by showrunners McKay and Payn and are played by actors Megan Richards, Sir Lenny Henry, and Markella Kavenagh. According to McKay and Payne, they wanted pastoral harfoots who would “thrive on secrecy and evading detection so that they can play out a kind of Rosencrantz and Guildenstern Are Dead story in the margins of the bigger quests.” While Henry will be playing a harfoot senior, Richards and Kavenagh are two chrismatic and curious harfoots that encounter a “a mysterious lost man whose origin promises to be an enticing enigma.” 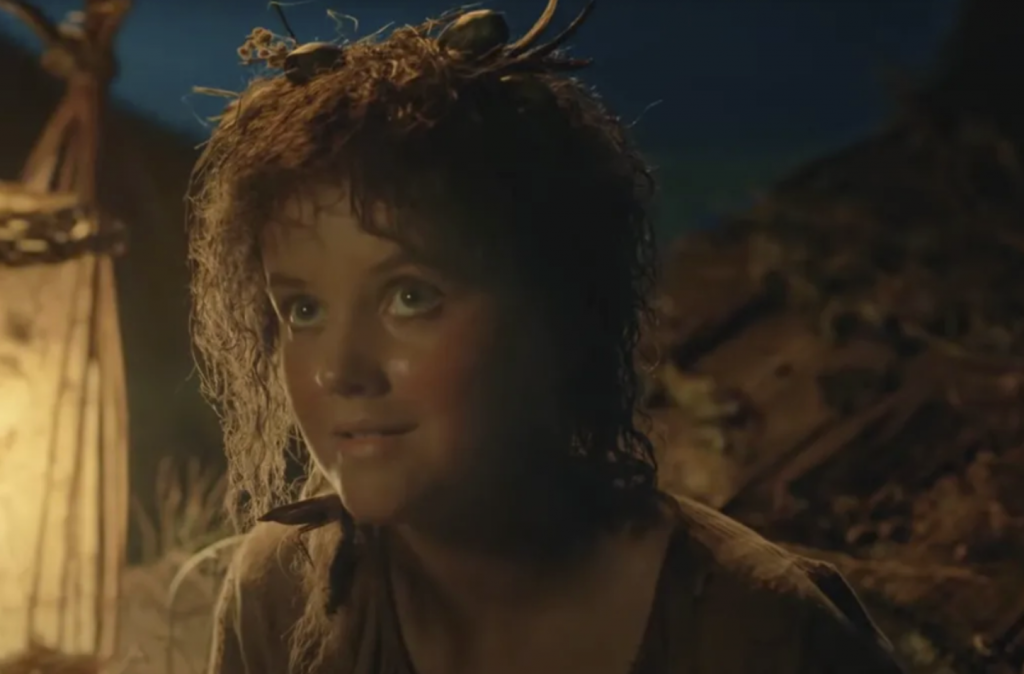 One show to rule them all—the first look at a billion-dollar saga set thousands of years before J.R.R. Tolkien’s legendary trilogy.

The Lord of the Rings: The Rings of Power Cast and Characters, Rumored and Confirmed by The Mary Sue
One list to read them all …