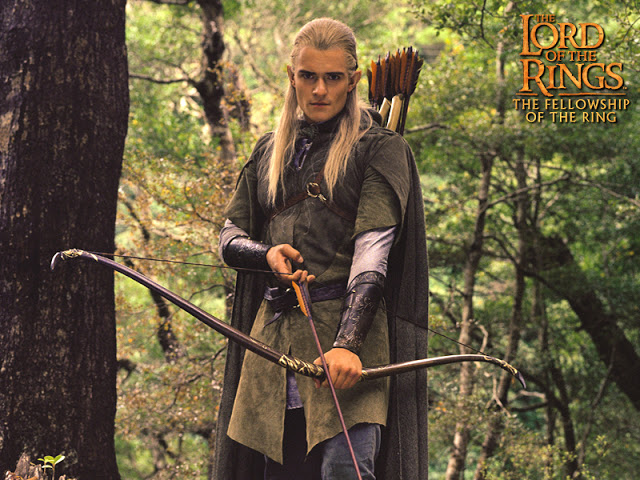 You may know there are at least two kinds of cloaks, Elven Cloaks and Cloaks of Lórien, in the movie series The Lord of the Rings. These memorable cloaks are all made by the Elves, however the differences in fabrics, wearers and other details will be the topic of this post.

Elven Cloaks: The Elves such as Galadriel, Lord Celebor, and Arwen all wear long, flowing cloaks. These cloaks are all sewn from light-colored fabrics and have the soft appearance of silk, linen, and velvet.

Cloaks of Lórien or Lothlorien: The Elves give members of The Fellowship handwoven Elven cloaks to hide them on their dangerous journey to find the One Ring and defeat Sauron. These cloaks have a rough-hewn woolen texture.

Gandalf’s Robes: Gandalf was absent and presumed dead, when the Elves gift cloaks to the members of The Fellowship. However, he appears later in the story in a similar but white Robe of Lorien with a green-leafed brooch. His robe suggests he went to the Elves and then rejoined The Fellowship. Note: Gandalf’s robe looks very similar to a cloak, however because it has sleeves its a robe. 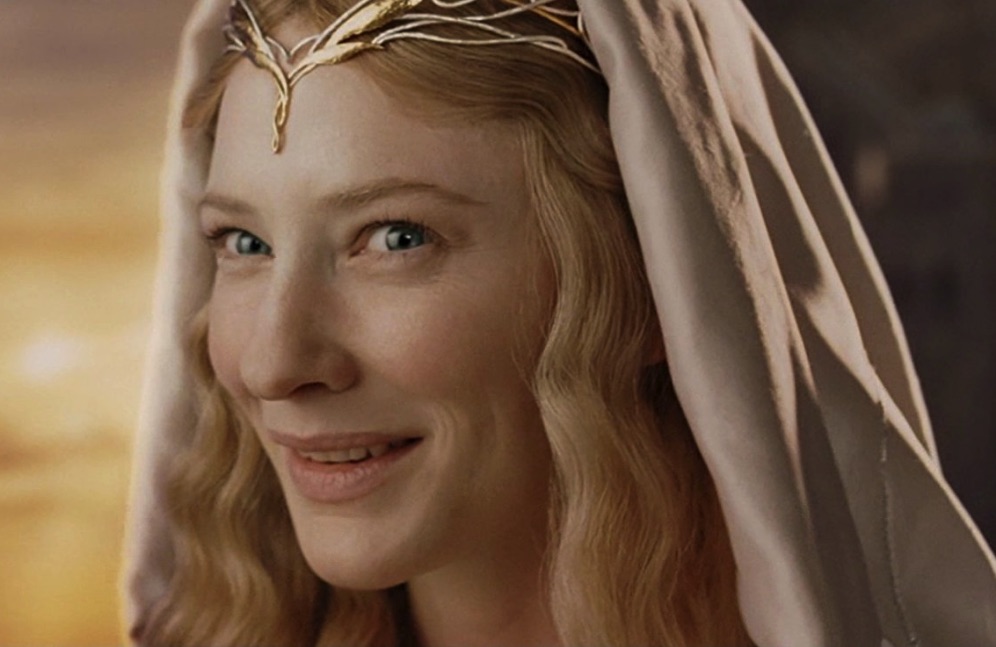 Cate Blanchett as Galadriel in Lord of The Rings | Photo: Warner Bros.

The Elves with their flowing cloaks and dresses are among the most mesmerizing elements in the Lord of the Rings movie series. The ethereal Elven cloaks and LOTR costumes overall were created by costume designer Ngila Dickson. 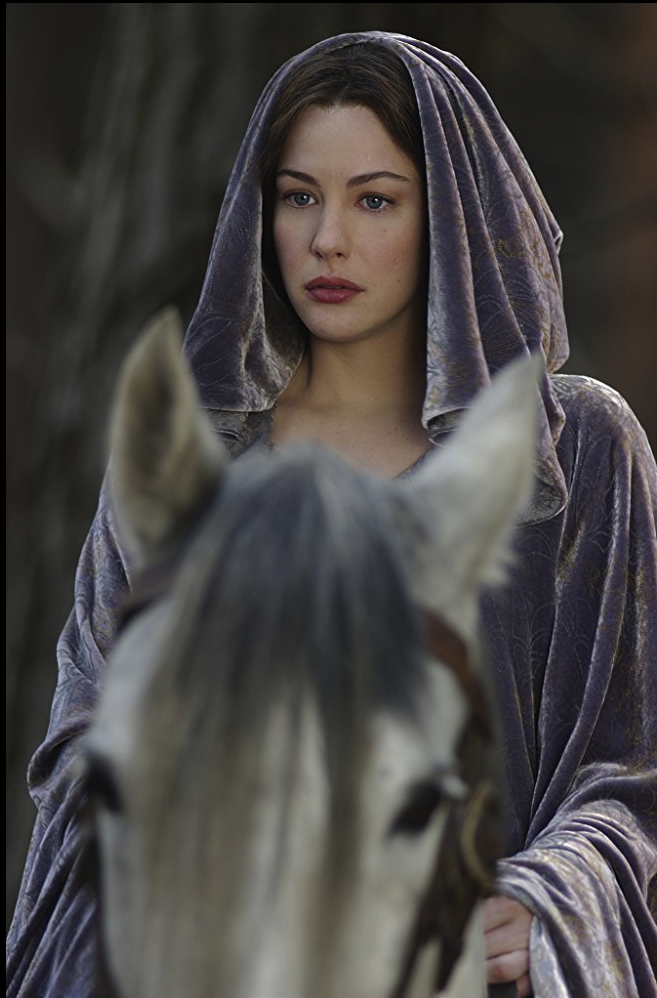 Liv Tyler as Arwen in Lord of the Rings | Photo: Warner Bros.

The Elven Identity and their Ethereal Elven Cloaks

The following press release (below) explains the Elven culture, innate powers, and place in the Tolkien world and Dickson’s costume design concept for them.

Elves… are noble, elegant, magical beings whose time is running out and who seem to possess a bittersweet sense that they are now about to pass into myth. Although they could be slain or die of grief, Elves are immortal in that they are not subject to age or disease.

For the Elves, Dickson went for sheer elegance, mossy greens, tree-bark browns, autumn scarlets, an androgynous quality and a touch of antiquity. “They invoke their environment,” she notes, “and they’re very light on the earth, so we searched for very, very fine layers of fabrics for them.” Their costumes were forged from Indian silk brocade, which Dickson washed, bleached, dyed and sandpapered to give the costumes a shimmering metallic gleam that looks organic.

The Elves also wear silk-velvet acid-etched gowns with Art Nouveau leaf designs. Even their sleeves are made in leaf shapes, coiling around the actors’ arms. On their feet are knee-high leather boots that add to their willowy appearance.  … They have a floating image to their costumes, using colors and fabric that are light and semi-shimmery.”
– from NLC Press Release, Dec 2001 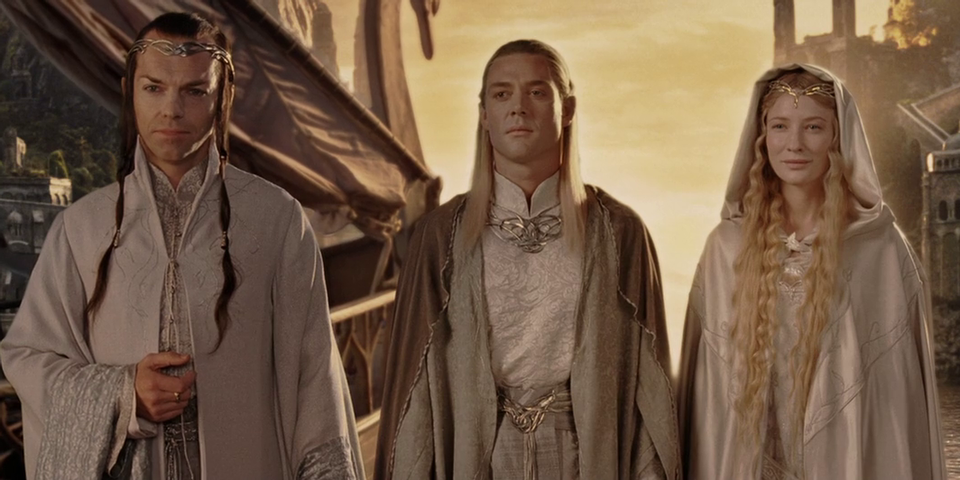 The Elves such as Lord Celebor and Galadriel | Photo: Warner Bros.

Cloaks of Lórien or Lothlorien

Galadriel and Lord Celeborn give a personal gift and a Cloak of Lórien to each of the remaining members of The Fellowship. The grey Elven cloaks were handwoven by Galadriel herself and her maidens and intended to hide them on their journey to defeat the Dark Lord Sauron. Additionally, each cloak is closed with a distinctive green-leafed brooch delicately veined with silver.

I say remaining members above, because at this point in the film, Gandalf is not with the others and is presumed dead. Gandalf appears later in Fangorn forest with a beautiful elven brooch on his elegant off-white robes which implies he traveled to Lórien before re-joining the Fellowship.

The airy grey cloaks give by Galadriel to The Fellowship are worn in the latter portion of Fellowship of the Ring movie.  Many fans are drawn to these simple but elegant cloaks! 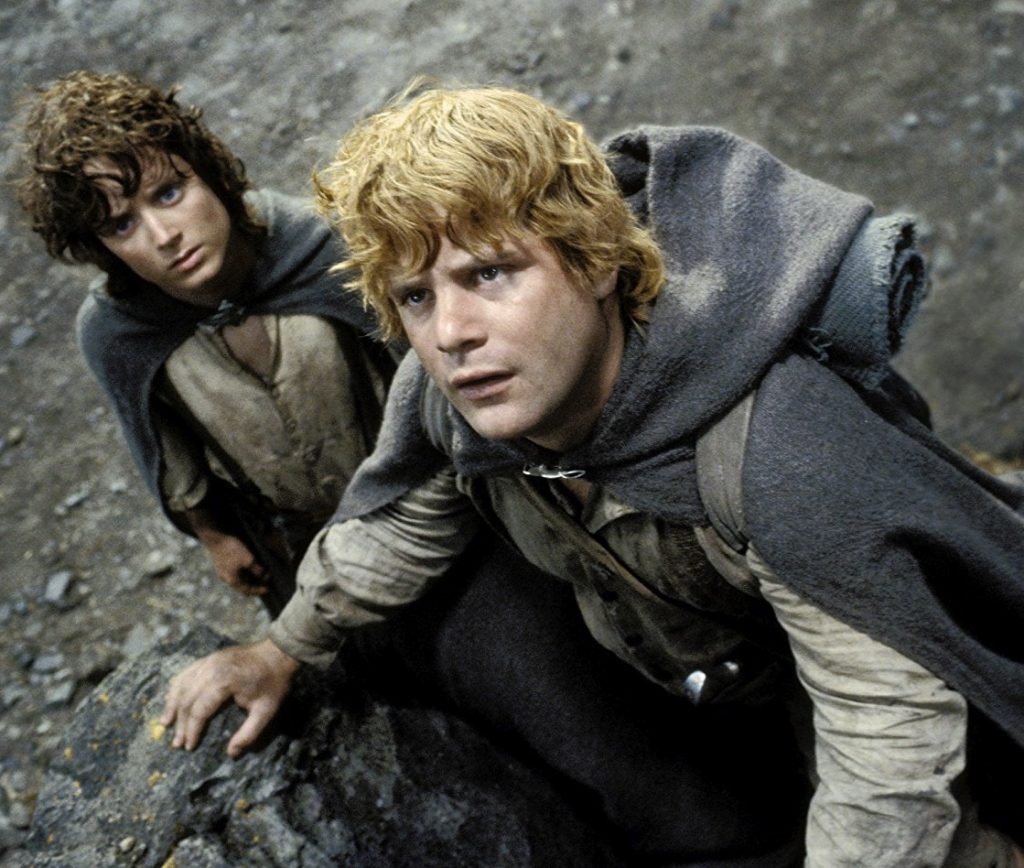 LOTR Fan Questions about the Cloaks of Lórien

What fabric are the Cloaks of Lórien made from?

What’s the Style of the Cloaks of Lórien?

The Fellowship Cloaks are half circle cloaks — with this cut you can see their costumes even with the cloaks on. Gandalf’s robe, on the other hand, is a full circle with sleeves and thus closes in the middle.

See a sketch of the LOTR Cloak shapes. 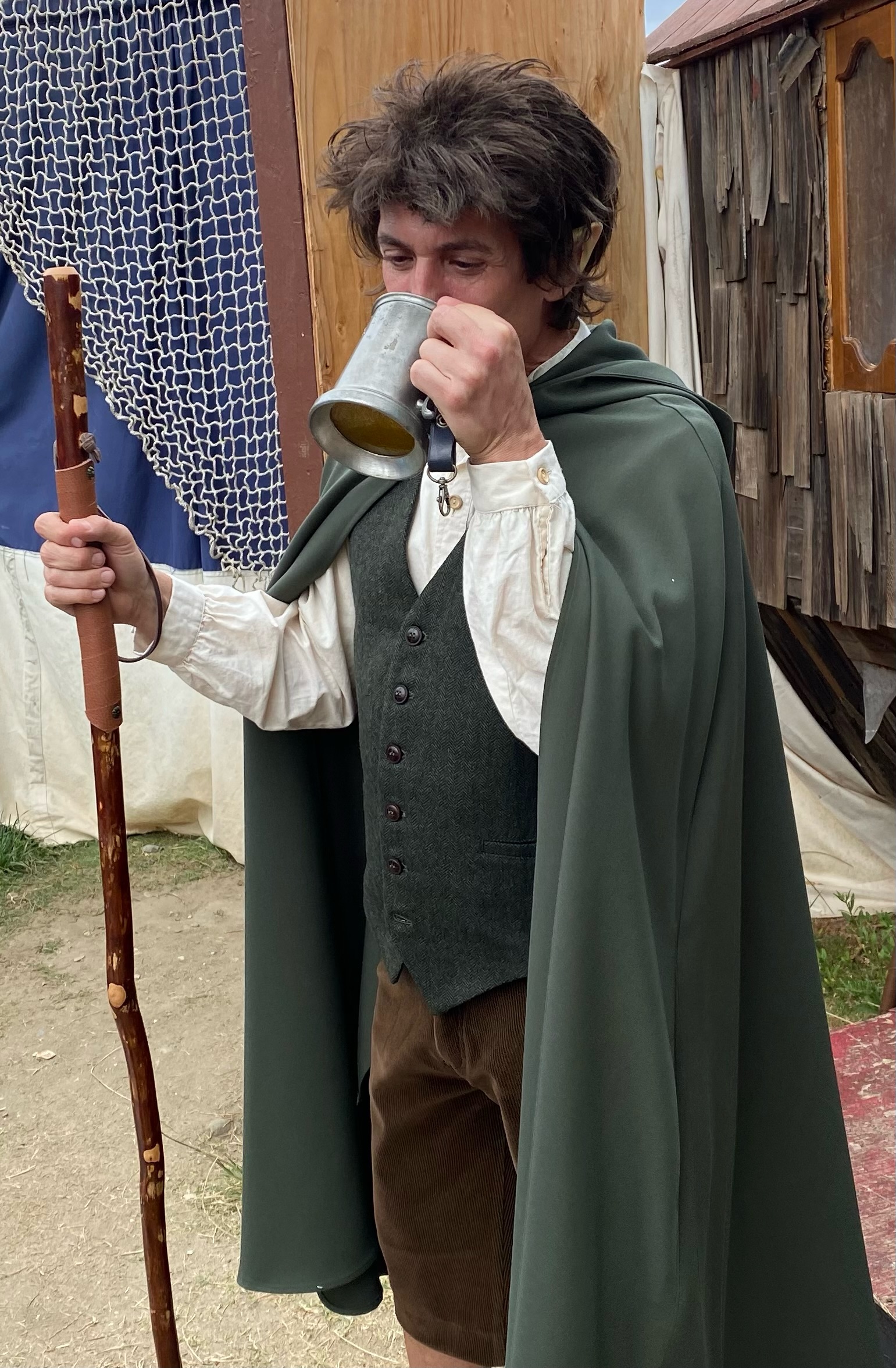 What Color are the Cloaks? Are the LOTR cloaks grey or green?

As we mentioned the cloaks are a natural grey wool. However, in the movie, the cloak often appears a grayish-green. The reason is the colors have been “sweetened” in post production and the green has been enhanced overall adding a grey cast to the cloaks as well.

Interestingly, The Lord of the Rings books by J.R. Tolkien also suggest also talks about the cloaks having different colors under different circumstances:

For each [of the Company] they had provided a hood and cloak, made according to his size, of the light but warm silken stuff that the Galadhrim wove. It was hard to say of what colour they were: grey with the hue of twilight under the trees they seemed to be; and yet if they were moved, or set in another light, they were green as shadowed leaves, or brown as fallow fields by night, dusk-silver as water under the stars. Each cloak was fastened about the neck with a brooch like a green leaf veined with silver.
— The Fellowship of the Ring, LoTR Book 2, Ch 8, Farewell to Lórien 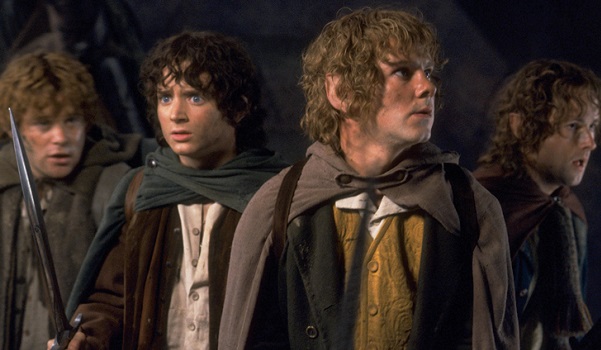 Are the Cloaks of Lórien Magical?

The following excerpt is from The Fellowship of the Ring:

‘Are these magic cloaks?’ asked Pippin, looking at them with wonder.‘I do not know what you mean by that,’ answered the leader of the Elves. ‘They are fair garments, and the web is good, for it was made in this land. They are Elvish robes certainly, if that is what you mean. Leaf and branch, water and stone: they have the hue and beauty of all these things under the twilight of Lórien that we love; for we put the thought of all that we love into all that we make. Yet they are garments, not armour, and they will not turn shaft or blade. But they should serve you well: they are light to wear, and warm enough or cool enough at need. And you will find them a great aid in keeping out of the sight of unfriendly eyes, whether you walk among the stones or the trees. You are indeed high in the favour of the Lady! For she herself and her maidens wove this stuff; and never before have we clad strangers in the garb of our own people.’
— The Fellowship of the Ring, LoTR Book 2, Ch 8, Farewell to Lórien

The Elves don’t reveal specifically if the garments have magical powers. They are a little indirect as Elves tend to be! 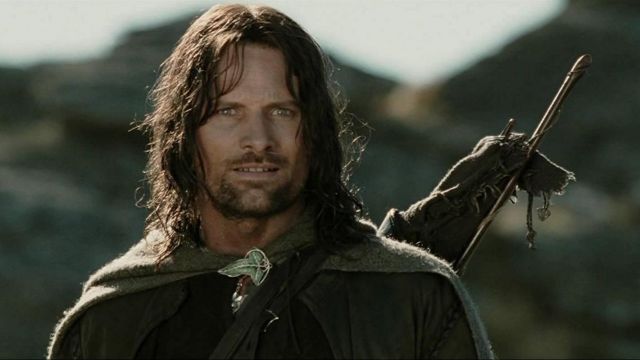 What do we know about the green-leaf brooch?

In the story, the green leaf brooches were gifted to The Fellowship at the same time as the grey cloaks. The brooch was designed by Jasmine Watson. For the movie, there were approximately 60 brooches in all (for scale doubles, stunt doubles, etc.). Later, they made a mold of the original brooch for mass production.

Both the originals and the replica leaf brooches have an ordinary pin back. Because this won’t hold the cloak on, it is recommended to build a hidden clasp into your cloak, and use the green leaf brooch as decoration. 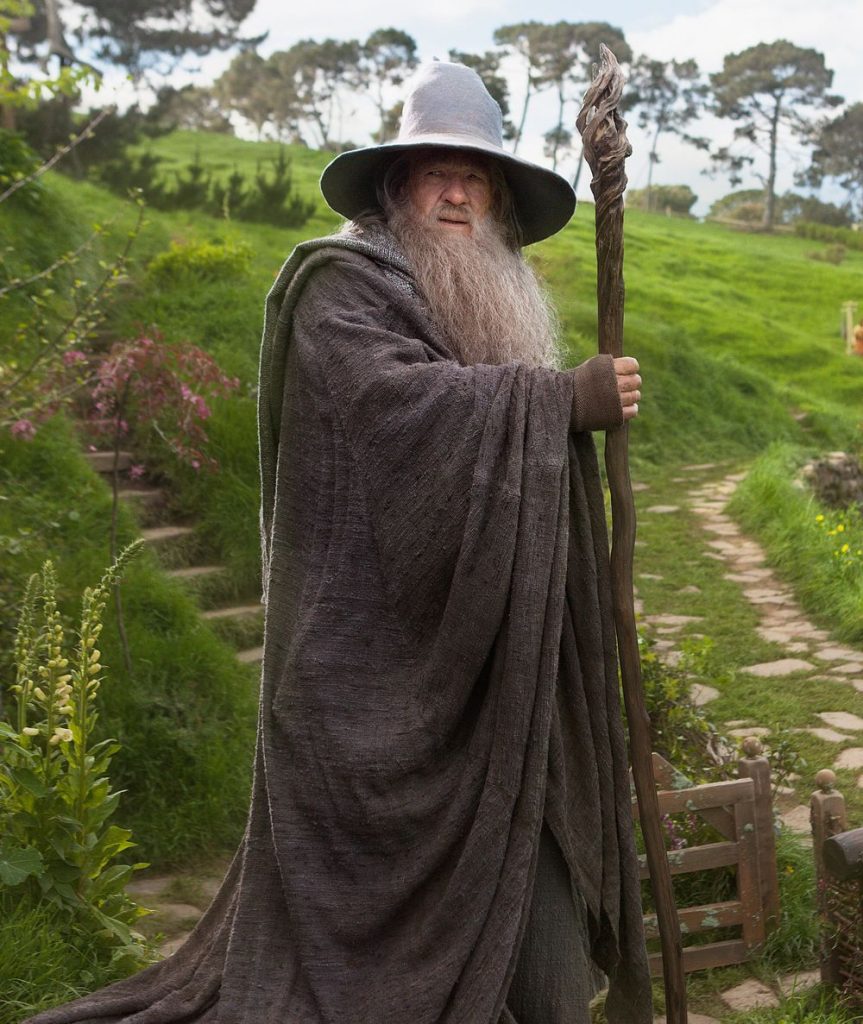 Ian McKellen as Gandalf in The Hobbit | Photo: Warner Bros.

About the Lord of the Ring Costumes Overall

Ngila Dickson was working on Xena: Warrior Princess when she was invited to work on The Lord of the Rings (LOTR) movies. She says it was a difficult decision to leave Xena but finally her Xena director told her she should take the LOTR costume designer job.

As you might know, the three LOTR movies were shot simultaneously over several years. Each costume design had 40 versions because of the length of production and the need for costumes for the main actors, stunt doubles and scale doubles! Ms. Dickson and her 40 seamstresses worked on over 19,000 costumes total! Crazy numbers, right?!

Another interesting fact about the Lord of the Rings costumes and cloaks is that Director Jackson wanted every detail to look real. The costumers made the costumes look “lived in”, by wearing away color, stuffing pockets and dirtying costumes for some of the actors, especially Gandalf and Aragorn who spent a long time on the road. A few other details of interest, Ms. Dickson decided that as the Hobbits were barefooted, she’d dress them in shorts. To increase the grace of the Elves and make them look like they are gliding, she gave them particularly long sleeves. 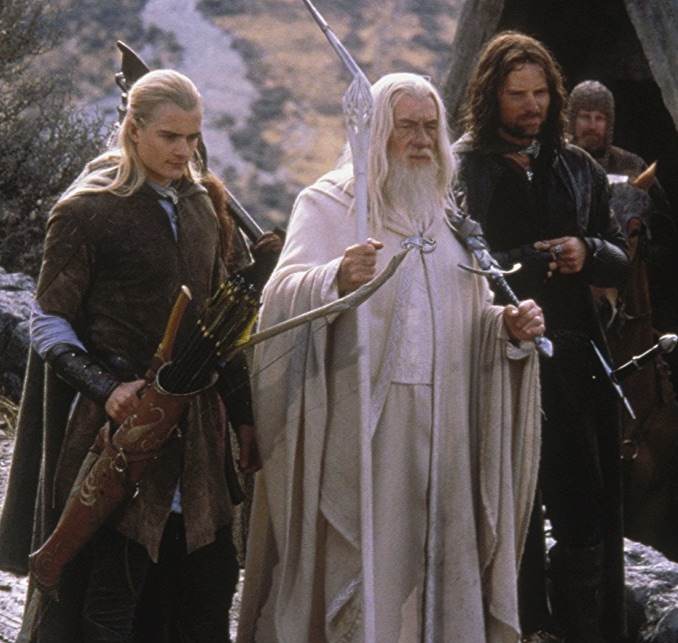 Costuming Awards for Lord of the Rings