What Are the Differences between House of the Dragon and Game of Thrones? 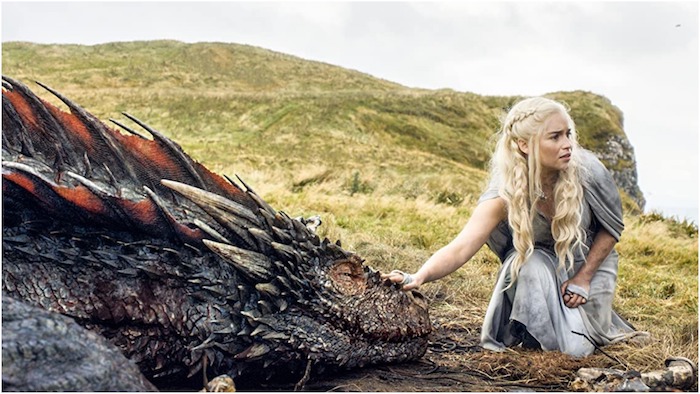 Likely you are wondering what are the differences between House of the Dragon and Game of Thrones. If you are a huge fan of the phenomenally violent, sex and death-filled Game of Thrones, you want to know how the new series will match or differ from its predecessor.

By the way, House of the Dragon will debut August 21, 2022 on the HBO cable network.

Many fans, and even author George R.R. Martin, were profoundly disappointed by the last season of Game of Thrones, so its also valid question to wonder how will House of the Dragon avoid the pitfalls of that last controversial season.

Fortunately for fans, the word from George R.R. Martin himself, author of the source material for House of the Dragon and Game of Thrones is that the new series has his approval and he’s very excited. He noted that the writing, directing, and acting all looked “terrific.” And he hopes that fans will like the prequel as much as he does. 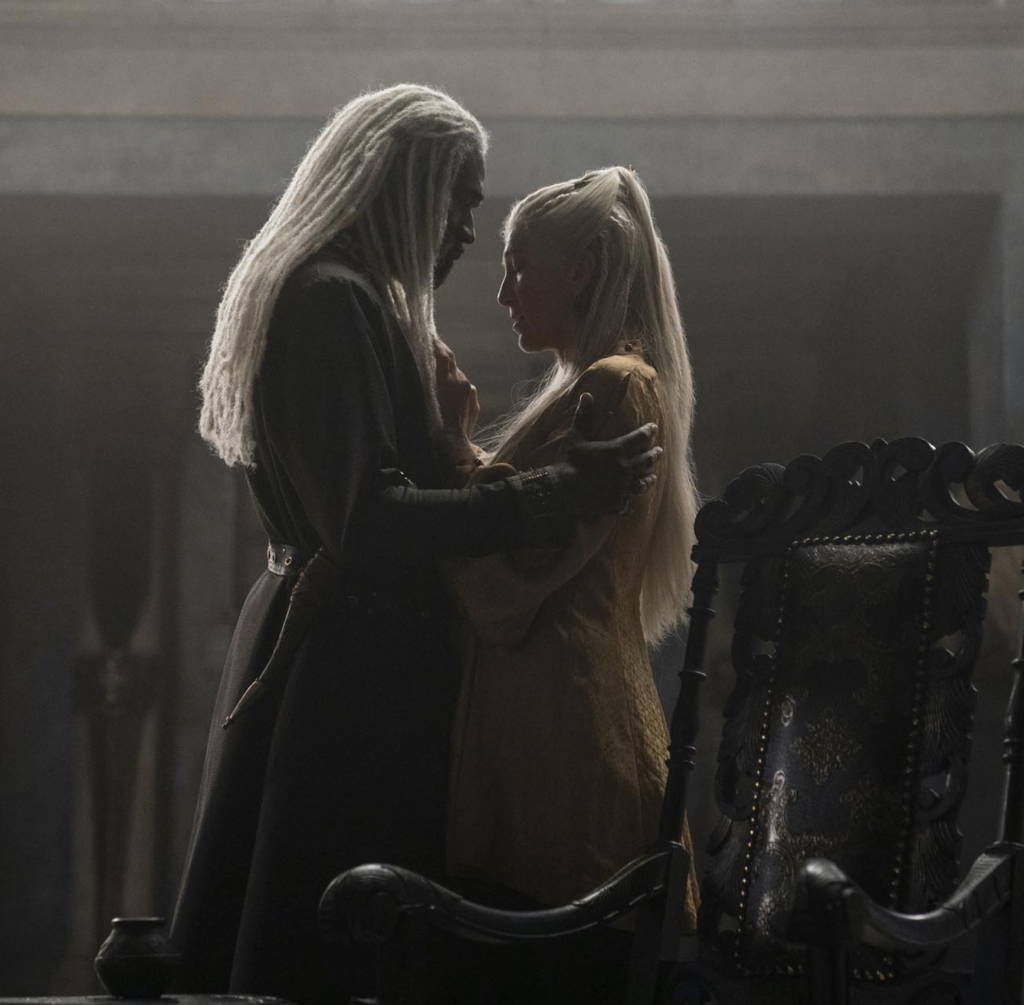 Hang on to your seats, as we’re going to delve into these 5 key differences:

Difference 1: Lots and Lots of Dragons

You would not be amiss if you guessed there are a lot of dragons in House of Dragons! 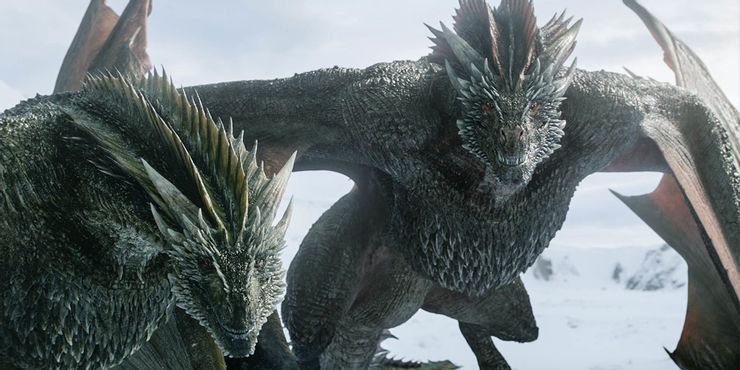 There were just three dragons in Game of Thrones, in House of the Dragon there will be as many as seventeen dragons.

And if you loved the dragons in Game of Thrones, and who didn’t, then you’ll be thrilled with House of Dragons. Many fans and TV critics agree one of the things that made GoT unique and compelling were the expertly realized CGI dragons: Drogon, Viserion and Rhaegal.

House of the Dragon is the story of a brutal civil war known as the Dance of the Dragons. 100 years before GoT, the Westero family is torn apart during the war, and the end of the Targaryen dynasty begins to draw near. Unfortunately, the civil war also brings the dragons to extinction.

However, prior to the Dance of Dragons, fire-breathing dragons were everywhere. In House of the Dragon, the many of the main characters all have their own dragons to ride, and each dragon is also a character in the story as well. In the war, the dragons will fight one another on the battlefield! The magical monsters will include newly hatched dragons to fierce and ancient monstrosities. Here’s the stories on the three baby dragons you can expect to see!

Morghul was a short-lived hatchling dragon, who was murdered when the peasants rose up to destroy the Targaryen rulers. In Morghul’s short life, they were a young dragon bound to Princess Jaehaera Targarye, daughter of Helaena and Aegon Targaryen. Sadly, for Morghul, they lived the entirety of their life in chains in the Dragonpit. The dragon was killed by “The Burning Knight,” who rushed into dragonfire to plunge a spear into Morghul as the dragon burned him alive.

Let’s backtrack a little. “The Moon of the Three Kings” or “The Moon of Madness” is an epoch towards the end of the Dance of Dragons. The ruler at King’s Landing is the formidable Queen Rhaenyra Targaryen (Emma D’Arcy), who sat on the Iron Throne for a short time. A one-handed prophet named “The Shepherd” led the small folk to rise up agains the Targaryen. They stormed the Dragonpit and slayed all the dragons, including several dragon hatchlings, like Morghul. The conflict took the lives of Rhaenyra’s entire Queensguard and her youngest son,

Shrykos was a young dragon bound to prince Jaehaerys Targaryen, twin to Jaehaera. In one of the more gruesome events in the Dance of Dragons, Jaehaerys was murdered as a child, and thus his dragon was never ridden. The story goes that Shrykos killed a large number of people while defending himself and others in the attack on the Dragonpit. Shrykos was killed by Hobb the Hewer, who drove his axe into Shrykos’ skull seven times.

Tyraxes is the only baby dragon to be ridden before their untimely death. Queen Rhaenyra forbade her youngest son Joffrey from riding Tyraxes into war. She had lost two sons and certainly didn’t want to lose her third and youngest son, though you may have already gathered Joffrey was to lose his life this same night. Thus Tyraxes was used only for transportation purposes. When the Dragonpit came under attack, Tyraxes barricaded himself in a separate chamber and roasted the oncoming horde. However, the angry mob found a different entrance and Tyraxes was strangled to death with his own chains. 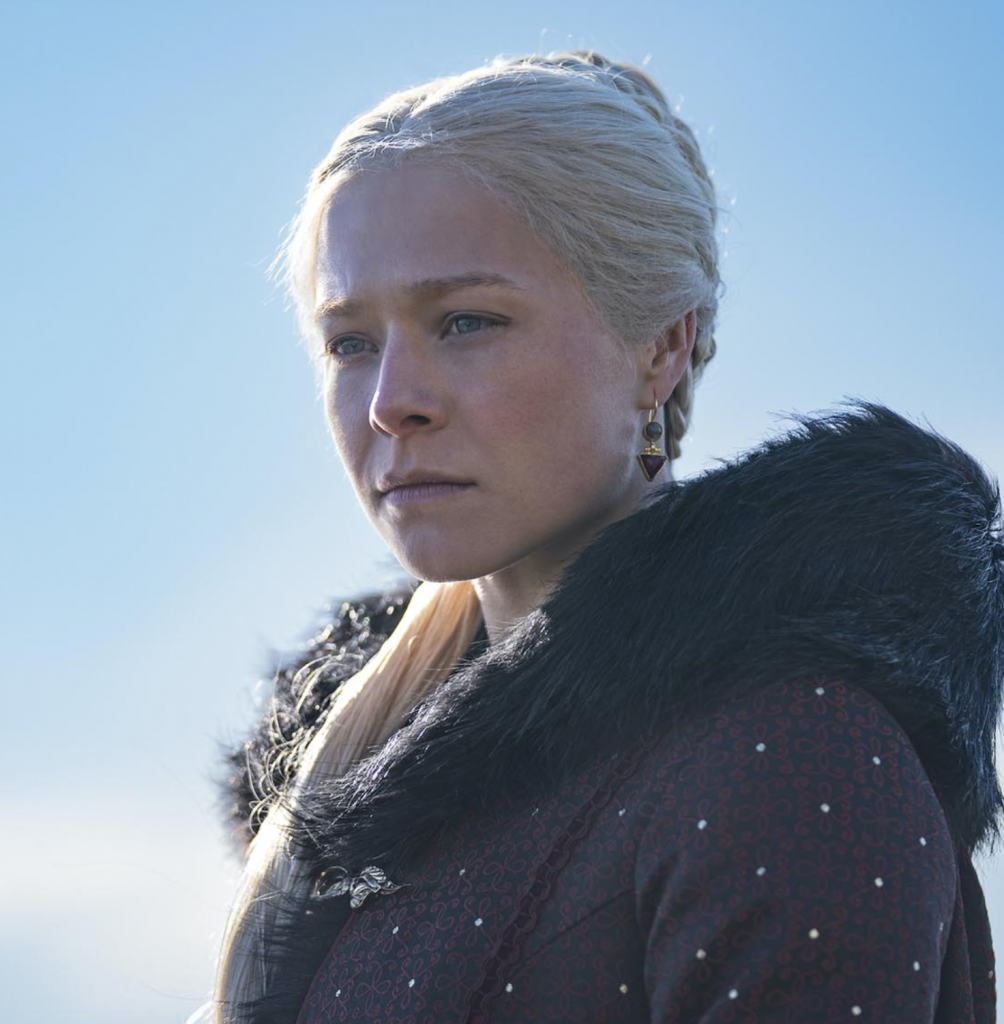 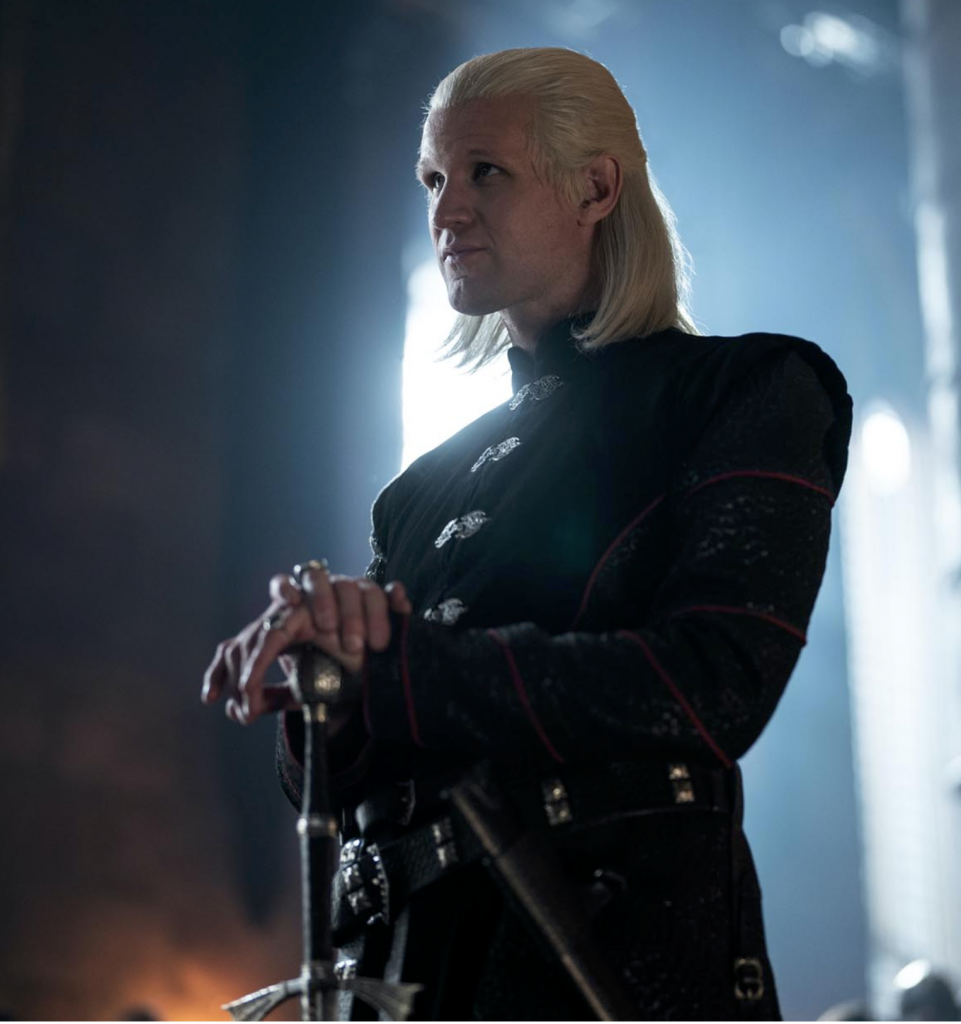 Difference 2: George R.R. Martin’s Approval of House of the Dragon versus the Final Season of Game of Thrones

That final book, book six, is called The Winds of Winter. But Martin hadn’t finished writing it in time for the final season of Game of Thrones. Therefore, the showrunners worked off Martin’s early plot outline. But the majority of fans and critics found that the story quality was not on par with previous seasons and they were very vocal about their negative appraisal.

“Looking back, I wish I’d stayed ahead of the books,” Martin said. “My biggest issue was when they began that series, I had four books already in print, and the fifth one came out just as the series was starting in 2011. I had a five-book head start, and these are gigantic books, as you know. I never thought they would catch up with me, but they did. They caught up with me and passed me.” 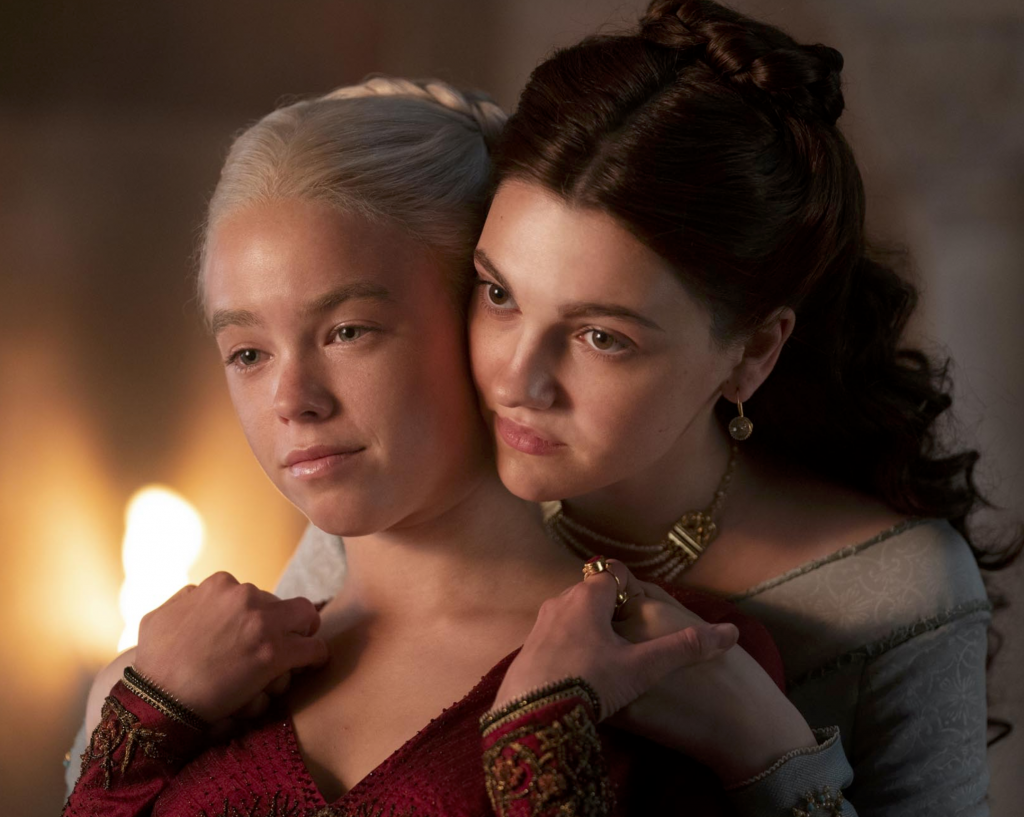 Milly Alcock and Emily Carey appear as younger versions of Rhaenyra and Alicent in ‘House of the Dragon.’ | CREDIT: OLLIE UPTON/HBO

House of the Dragon chronicles the demise of House Targaryen’s dynasty. The show will delve into the events surrounding the Dance of the Dragons, a civil war that consumed the Targaryens roughly 300 years before the events of Game of Thrones.

While e00 years is a significant jump back in time, its not as huge as that of the now-canceled Age of Heroes prequel. If that series had been a go, it would have transported us 5,000 years in the past and most likely covered the first war between humankind and the White Walkers.

As previously mentioned, the new HBO series House of the Dragon will focus on the bloody civil war known as “The Dance of the Dragons.” Aegon II battles his sister Rhaenyra to be Rulers of Targaryen. Both end up dead in the civil war they unleashed and its the beginning of the end for House Targaryen. The civil war also leads to  the disappearance of dragons, a regrettable circumstance for most fans. 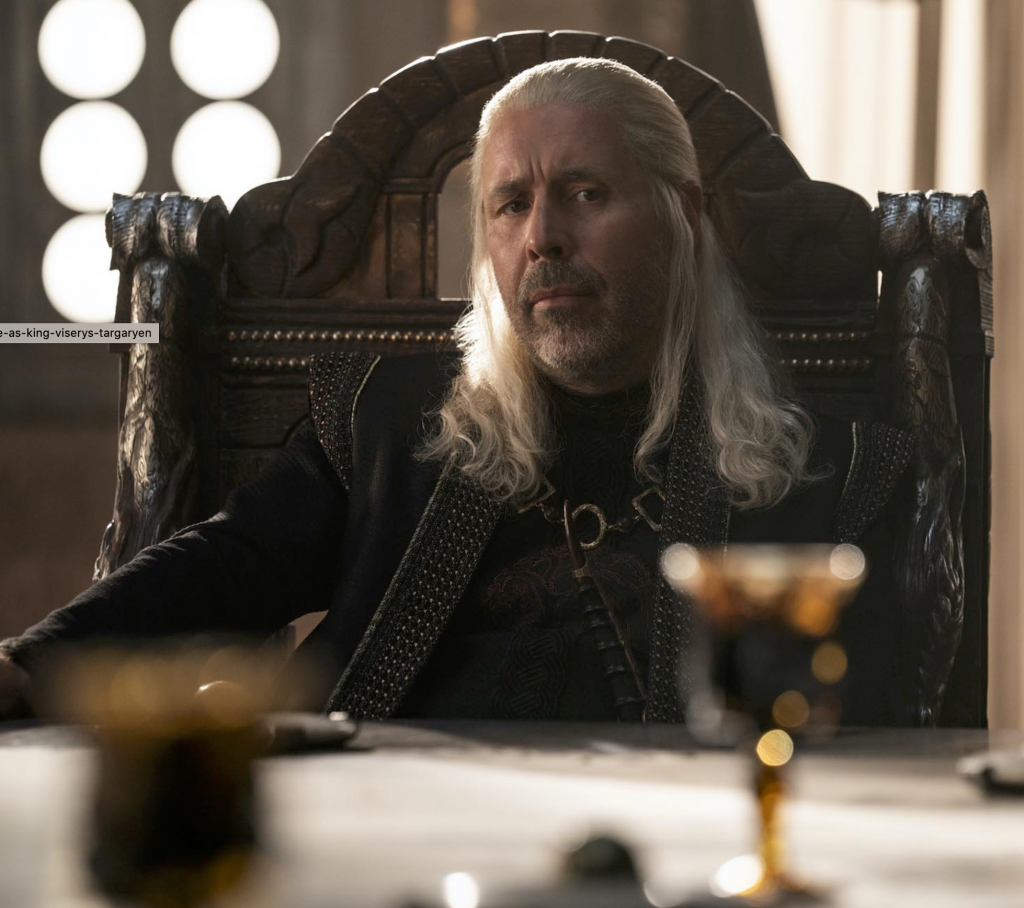 Difference 4: Civil War in House of the Dragon versus Multiple Game of Thrones Wars

Writer Matthew James of Screen Rant argues eloquently that the civil war setting in House of the Dragon will fix many of the problems of Game of Thrones and possibly make for a more compelling story than GoT. Of course, its’ conjecture at this point, we need to wait and see the show.

His argues thus. The civil war era setting changes the overall story dynamic and focal point compared to Game of Thrones. The Targaryen Civil War, known as The Dance of the Dragons, tells the story of rival siblings Aegon and Rhaenyra Targaryen. As the siblings vie for the right to the Iron Throne, the various houses and lords of the Seven Kingdoms take sides between the two. The politics and intrigue surrounding the war means no character is all good or all bad. On the contrary, most characters are in some grey area trying to protect their self-interest and survive the civil war raging around them.

Matthew James’ sees this as a more intriguing narrative. House of the Dragon’s story no longer centers on multiple Kingdoms competing to rule the others. Instead there are two Targaryen factions splitting the houses of the Seven Kingdoms down the middle, dragging all into an all-out civil war. The civil war story will be more ambitious and more human. There will not be multiple conflicts but one major one, and there will be no good or evil characters, but rather more human characters who are a mix of qualities. 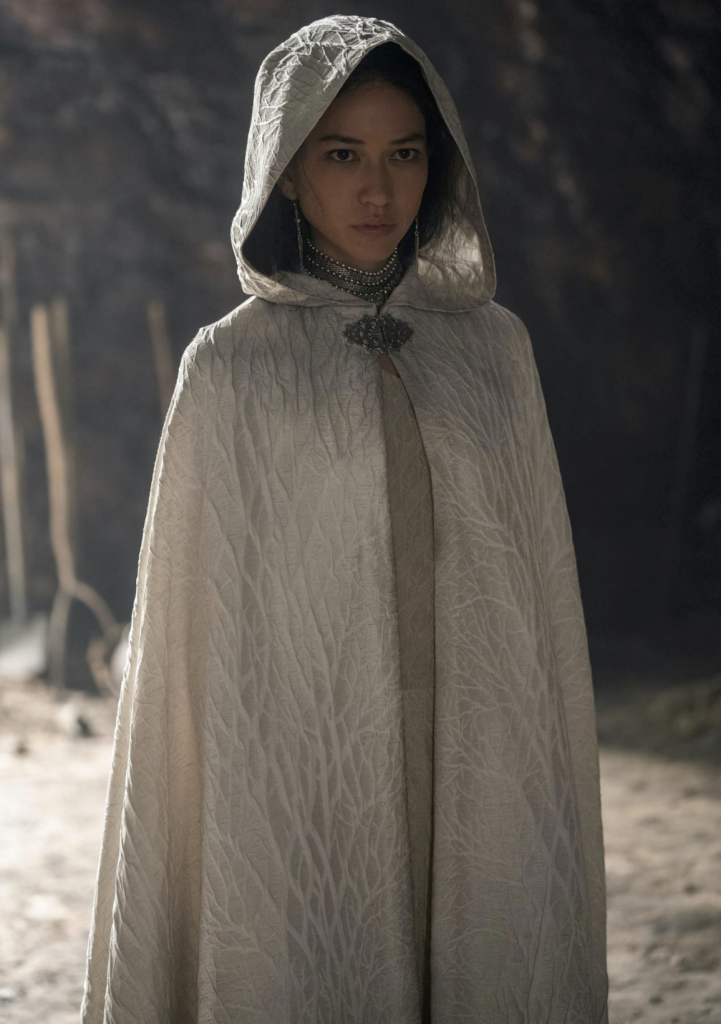 Sonoyo Mizuno appears as Mysaria in ‘House of the Dragon.’ | CREDIT: OLLIE UPTON/HBO

Difference 5: Based on Fire and Blood and not the novels The Songs of Fire and Ice

Author George R.R. Martin has been writing a detailed historical background of Westeros for many years. In fact there is an illustrated companion book The World of Ice & Fire. Because the manuscript that covers House Targaryen’s tumultuous history became quite lengthy, Martin decided to publish it as a pair of novels.

Fire & Blood came out in November 2018 and is the first of those two novels. It gets its name from the slogan of House Targaryen. As promised it covers seven generations of Targaryen family history and their rulers, from Aegon I through his descendant Aegon III. There is a second untitled and unpublished book. It’s presumed that it chronicles the fall of House Targaryen under the doomed reign of the Mad King Aerys II. Martin has informed fans that the second book is several years away from release.

House of the Dragon is expected to be an adaptation from the book Fire & Blood, rather than a close retelling. Fire & Blood is sometimes compared to J.R.R. Tolkien’s posthumous Lord of the Rings prequel The Silmarillion, and not for good reasons! The book takes a dry, historical approach to chronicling the Westerosi history. Thus the series is likely to use the Fire & Blood storyline and characters to tell a narrative-driven story. 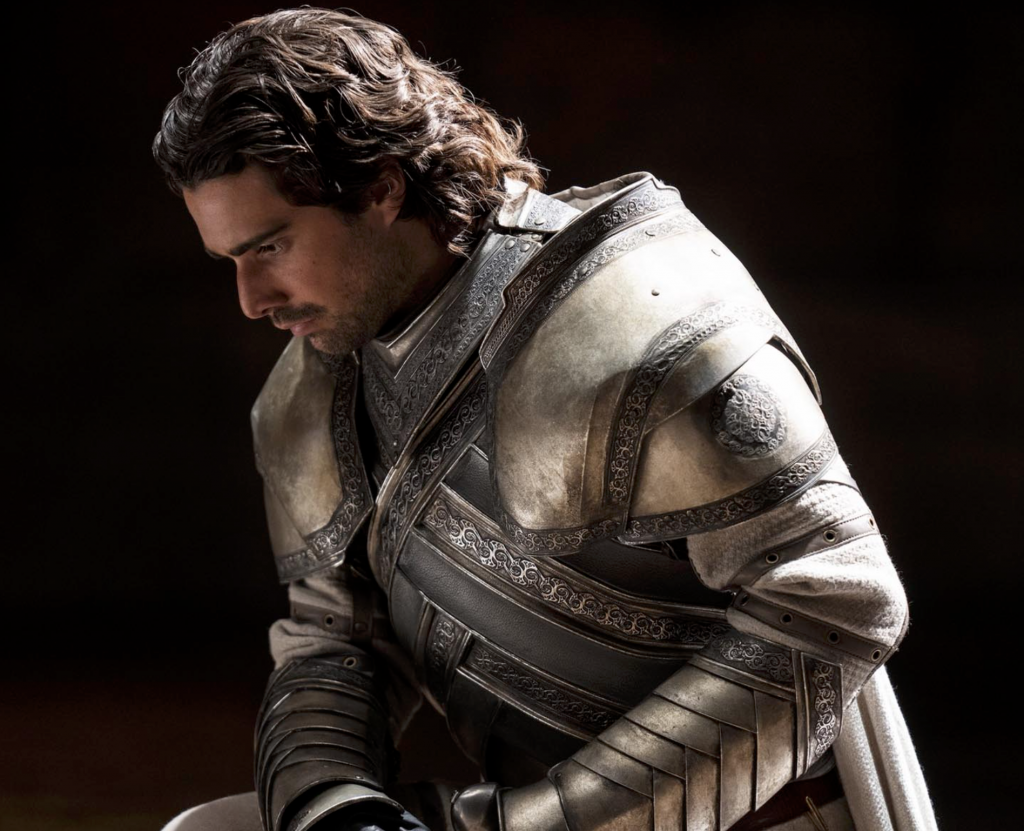 Difference 6: How will the Cast of House of the Dragon Differ from GoT

Brace yourself for changes here. House of the Dragon is set 200 years in the past, therefore the characters are 100% different. What the fans don’t know now is how much of the Westerosi timeline the 10 episode series might include. Will Game of Thrones characters like Maester Aemon appear in later episodes of House of the Dragon? Perhaps we’ll see Aemon as a youth.

Some wonder if the House of the Dragon might delve into the events of Robert’s Rebellion in greater depth. However, Game of Thrones has already featured multiple flashbacks of Robert’s Rebellion, so our view is that this is a story fans already are familiar with and probably doesn’t bear retelling when so many other storylines are possible.

Embed Video There is a short video about the characters we could use here. Also, good photos here.
https://www.ign.com/articles/house-of-the-dragon-hbo-game-of-thrones-targaryen-prequel-explained

All the dragons in House of the Dragon, HBO’s Game of Thrones prequel

‘House of the Dragon’ Already Has 1 Major Difference Than the Final Season of ‘Game of Thrones’ — George R.R. Martin’s Approval