Harry Potter Cloaks and Costumes in The Cursed Child 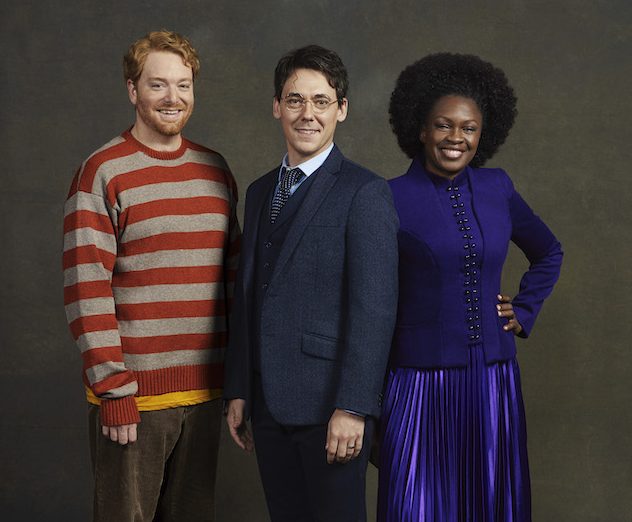 Let’s begin with the women’s cloaks, men’s cloaks, and Harry Potter cloaks in the stage production, The Cursed Child.

Costume designer Katrina Lindsay choose cloaks that would move in a certain way to enhance the show’s choreography and transitions. The Hogwarts students and teachers each have their own cloak design. Remember the sorting hat scene! A hood with the house colors is added to each students’ cloak immediately after the sorting. There are also Ministry cloaks, travel cloaks, Harry Potter cloaks, a purple Hermione cloak and variations on cloaks for the evil characters like Malfoy, Scorpios and Professor Umbridge.

The cloaks are designed for movement. Therefore the weight and the cut of the fabric was hugely important to getting the desired look on stage. The weight of the fabric is important so the performer can move naturally and not be burdened. The fabric durability matters too so it’ll survive months of performances and daily washings.

Costumes and Cloaks for Harry, Ron and Hermione

Designing the Harry, Ron and Hermione costumes was the labor of love of costume designer Katrina Lindsay, for Harry Potter and the Cursed Child. It’s intriguing to listen to her describe the challenge of designing for these exceptionally popular characters we all know. Of course, we fans have expectations about what they will look like! Designer Katrina Lindsay focused on making Harry, Hermione or Ron recognizable from near or far when any member of the trio walked out on stage.

To create the costumes Katrina Lindsay went back to the JK Rowling books and at the same time involved the actors and costumers in a workshop process. The costuming process ran parallel with the rehearsals and story writing of the magical world of Harry Potter and took about a year. There are actually over 500 costumes for the Cursed Child! The creative team discovered that cloaks were perfect for helping people and objects appear and disappear on stage. Their goal was to achieve multiple magical effects, otherworldly creatures and truly surprising moments. By knitting together costumes, lighting and choreography, they were able to create seamless illusions such as characters appearing and disappearing.

How Did the Visuals of the Harry Potter Films Influence the Stage Production Costumes?

Katrina Lindsay was keenly aware of this the challenge. She balanced the expectations of the Harry Potter fans, but also created unique looks for the play. Thus, audiences recognize their favorite characters immediately but know they are witnessing the future lives of Harry, Hermione and Ron. Of course, Harry Potter wouldn’t be Harry without his disheveled hair, round glasses, or forehead scar, so these kinds of details are included.

The Colour Palette for Ron, Hermione and Harry

Not surprisingly, the wizarding world is very British with a vintage aesthetic that includes the color palette and certain types of materials and headgear. Interestingly, the cloaks create a lot of blackness on stage so the lighting experts compensate with additional lighting. As mentioned before, the designer wanted the main characters to be immediately identifiable despite the dark palette onstage. Thus, Hermione, Harry and Ron’s costumes glow thanks to a jewel-like palette.

Harry’s role at the Ministry of Magic keeps him slightly hassled and frazzled. The designer worked to combine the official look of a suit with the notion that Harry wouldn’t be entirely comfortable in a suit. To achieve this Harry’s costume consists of separate trousers, waistcoat and jacket — each of which is unique. Harry also wears combat boots to show that he still loves to be where the action is! Then for business he wears a teal trench cloak which really is combination cloak and trench coat.

Hermione is now THE MINISTER of Magic. Entirely possible given her intelligence, grit and hardworking nature. Her costume is meant to convey elegance and ease as well as be modern and timeless. Her look is far more dramatic than Ginny’s, Ron’s or Harry’s. Hermione’s tailored pieces and the color purple show her power and status at the Ministry of Magic. In designing her costume there was intention to reflect her connection to both muggles and wizards and witches, again in line with her role at the Ministry. Perhaps many fans wouldn’t expect Ron and Hermione to be a couple, but the costume crew worked to give both a certain ease that explained their connection. Ron’s costume conveys ease of comfort while Hermione’s shows ease of movement. Her costume also includes a purple cloak / cape that she wears for Ministry business.

Ron is a naturally warm and reliable person. Thus when Katrina designed for him she decided he didn’t spend a lot of time focused on his clothes. On the contrary, his costume is chosen for comfort and references his Mum’s hand knit sweaters that he hated as a child. Thus Ron is Mr Comfortable — he’s happily married to Hermione and he lives a contented life. He wears oranges and browns, to complement his hair, and the softness of the sweaters add to the at-ease-at-home feeling. The jumper, as they call them in England, is more adult-ish than the hand knit ones his Mom made but still references his Weasley family .

Now to the Villians!

The edgy and experimental look of the villians makes them ever so much fun to design for, says Katrina Lindsay. Because of the complex details of the villian costumes, the design team met weekly with each actor for a long fitting session to ensure that each costume was a good fit for the actor’s body. Ultimately they want to ensure the actor is wearing the costume and not the other way around. For example, Draco’s unusual and rigid costume is a frock coat with a waist coat on top.

As fans know, Dolores Umbridge is an evil toad-like character. But she’s a total study in contrasts as she also she likes cats and speaks and dresses in girly way. Her squat, round body is also womanly with lots of voluptuous curves. The designers exaggerated her figure — hers is really one of the most complex and layered costumes in the production.

Scorpios Malfoy has an other-worldly presence. His lanky presence and skinny legs make him sympathetic — in fact he’s one of the most popular characters in the stage production. Scorpios’ and Malfoy’s blond wigs makes them attractive and easy to recognize on stage. In the beginning of the play, Scorpios’ big robe hides him, but later he wears a militaristic-stylized jacket.

Moving on to Snape, he wears a very long cloak. While his character is silent much of the time, when he moves the cloak gives him a bigger presence. His memorable costume includes a roman vest, militaristic cut jacket with a high collar and 19th Century tails.

As Katrina mentioned before, the designs are defined by a very British, vintage aesthetic that’s expressed in the color palette, the materials, and the headgear. It was her desire to create an atmospheric type of beauty for Harry Potter and The Cursed Child. She achieves that by balancing the everyday with the fantastically magical!

Interview with Katrina Lindsay, the costume designer for Harry Potter and the Cursed Child