Which Witch Will You Be: 8 Different Witch Costumes for your Halloween Party 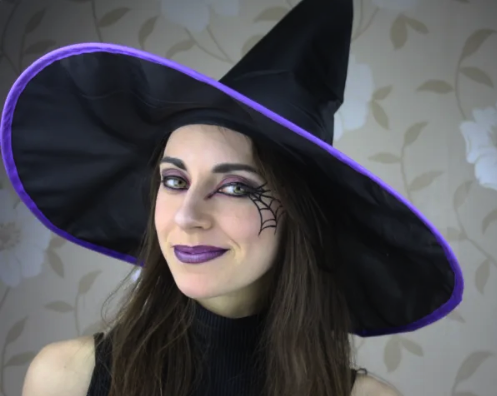 Witch costumes are one of the most popular Halloween costumes each year. However, when your friend tells you they’re going as a “witch,” that doesn’t tell you as much as you may think.

We can identify at least 8 different types of witch costumes. And you can probably think of a few others.

Witches can be scary and green, or a playful spider web-based witch which no doubt has an arachnid familiar.

Some witches are elegant with a gothic style and intricate makeup.

Apart from black, purple is also a popular color for witches, but you might see witch costumes that feature red or even gold (any lush color is a candidate). Of course keeping things light means a playful witch costume — maybe like the witch in the title animation for “Bewitched” (OK, showing my age here).

The modern sexy witch often has a form-fitting black dress, though, of course, all of these styles can be worked into something sexy.

And let’s not forget good witches! Sometimes Glinda the Good Witch is who you want to be. Of course, it’s hard to talk about witches without mentioning the Harry Potter world… but we’re going to try — that’s a whole other post.

You really can make any of the witch costumes scary or sexy or playful. So by all means pick your witch style, and get busy costuming. 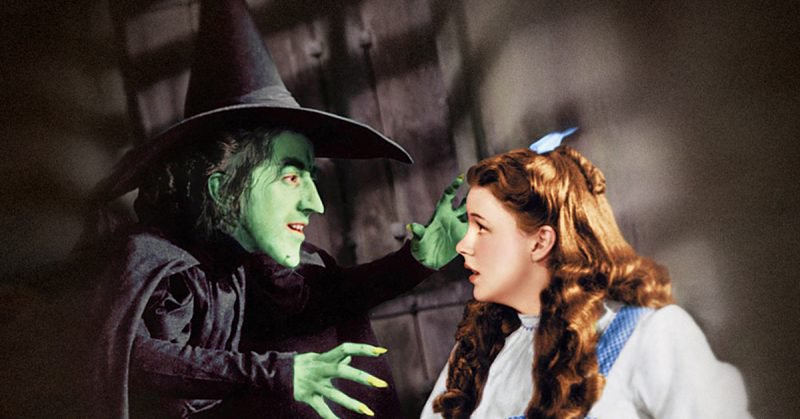 What a lot of people think of as the prototypical “witch” look dates to the 1939 movie version of The Wizard of Oz. The film presentation of Baum’s Wicked Witch of the West has become a standard for how we think of scary witches.

This witch face is a deep green. Her costume included a pointed witch hat, black witch hair, black dress, straw broom, pointy black shoes, and long finger nails. A green wart or two completes the look. The Wicked Witch of the West has an eye-patch in the novel but not in the movie. Little dogs are optional (nah, who am I kidding — little dogs are adorable). 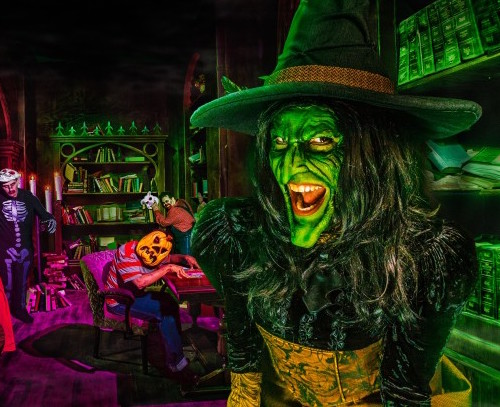 Another infamous green witch is part of Knott’s Scary Farm, an annual event at Knott’s Berry Farm in Southern California. The whole 160-acre theme park is transformed into an event with roaming monsters, terrifying mazes and scare zones. The green witch is the longest participating character at the Scare Farm for the last 47 years. Apart from the rich green skin, nose, and warts, this witch breaks from the Oz witch with a more eclectic costume — though the pointy hat is a must.

This witch might have a spiderweb themed hat, skirt, dress, leggings and / or make up. Whether you make your own DIY cobweb or purchase from a craft store or Halloween store, there is so many fun things one can do with this cobweb motif. You can tell I’m getting excited about the possibilities. The cobweb texture adds a lot of interest and uniqueness to the witches costume.

Some party or craft store sells spiderweb table runners. One can cut the table runner into an eye-catching skirt. You can also add some white or red rhinestones to the cobweb to make the pattern more visible. Very chic too!!

Another amazing idea is this felt spiderweb cape on Dalia’s Creates. She explains step-by-step in the tutorial how she made one for herself and her daughter.

This also shows how a single piece can make a costume. You could grab (or make) a spider-web cape and wear pretty much whatever you want with it (well, maybe not sweats and a sporty-T). A pointy hat can have the same effect.

Like the spiderweb witch, the tutu witch is an elegant, classy, chic witch. Looking at witch costumes online, you’ll see these witch tutus in a variety of colors such as green & black, gold & black, white & black, multi-colored, red and black, purple & black. I think I’ve named all the primary colors except blue. Haven’t seen a blue witch tutu as of yet. Check out this elegant, elegant giant tulle skirt from blogger ChicGeekErin.

In my book, this goes along with the Elizabethan style of witches costume (as in the photo from Hocus Pocus below). Lush colors, large skirts, and ornate finishing give the impression of wealth and power — and an immortal being who’s been alive for centuries, and locked in her fashion sense in the 1500s.

At some point purple became as much a Halloween color as orange and black. Many people find purple a powerful color, after all it was a color used by royals to symbolize power and wealth. It also has a spiritual connotation for many people as purple was used for European clergy vestments as well.

Personally, I associate purple with the supernatural as its popular for witches. Most purple witch costumes combine generous amounts of purple and black on the hat, dress, boots, tulle shirt or, dramatic purple eye make up as shown here!

So pairing a hat or some make up with something purple (and probably something black) might be all the costume you need. Note that the color does need to be purple or violet. In my opinion, lavender just won’t have the same effect. Check out this Purple Spellbound Witch – Makeup Tutorial at Cupful of Sprinkle.

A popular witch costume accessory are striped tights like the whimsical purple and black ones below.

Really, a playful witch costume is like a sexy witch costume — it can be based on any of the other styles, but done with a sense of fun (and striped purple leggings).

The goth witch look is extremely popular! More and more people have been expressing the dark side of their feminine person for Halloween or throughout the year if they identify as a witch or pagan. Personally, I believe its cathartic or freeing to delve into the dark side as there is often pressure to be sunny so much of the time. But I digress.

The gothic witch costume could consist of black things already in your wardrobe or perhaps you’d love to add a black hooded cloak from yours truly! Here’s a photo of one of our Raven Fox Cloaks as goth witch attire. 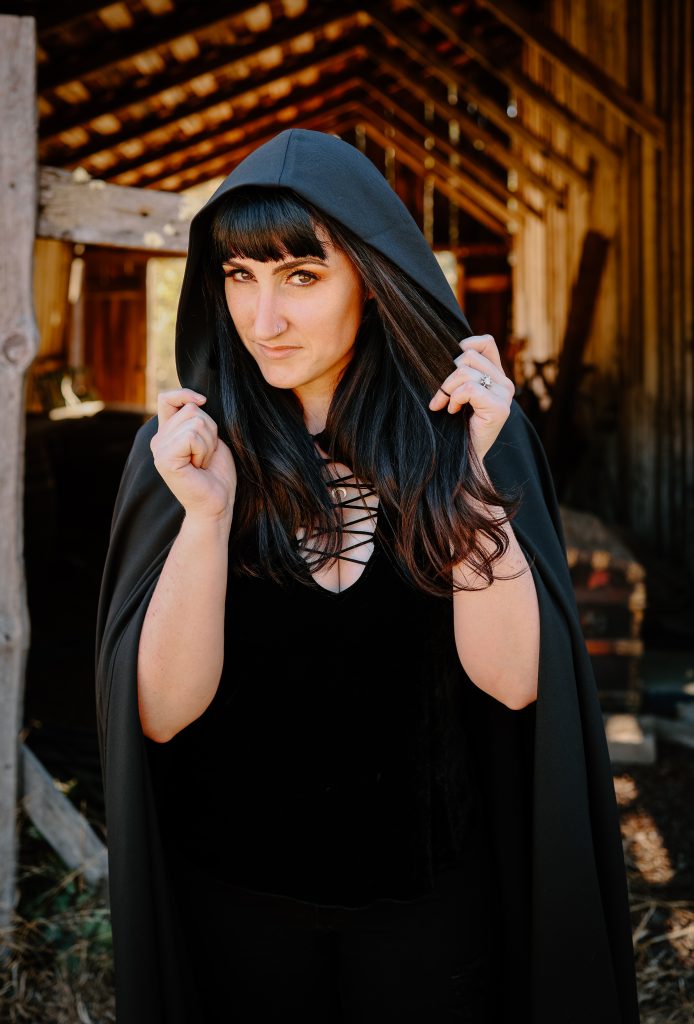 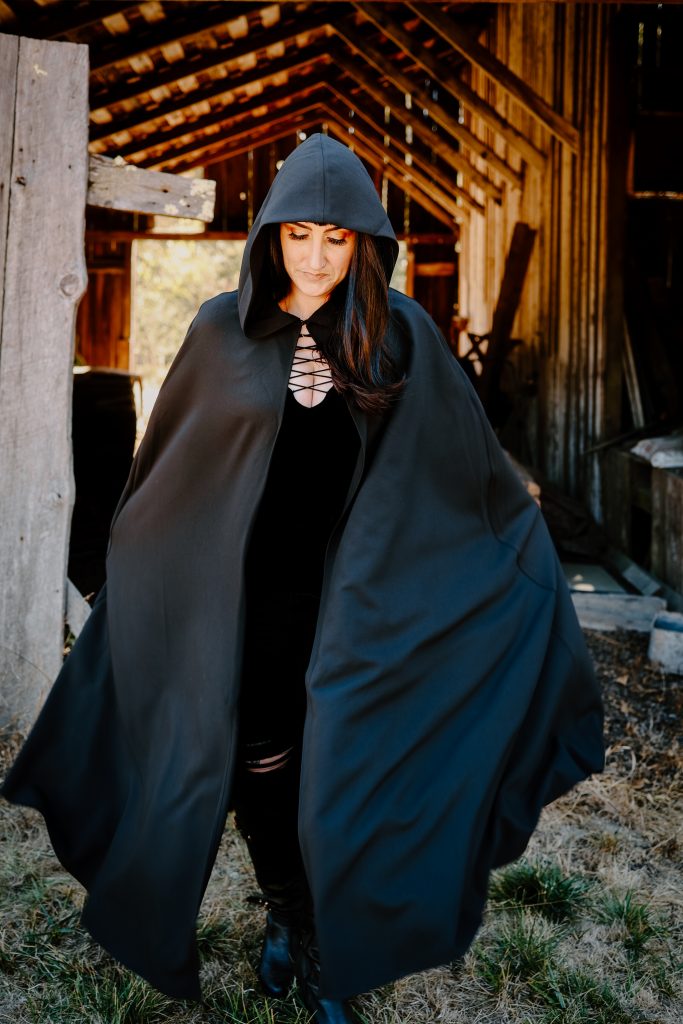 The Goth style is different from the Elizabethan style because it borrows more from severe Victorian fashion rather than the ornate Elizabethan era, though it can feature a lot of velvet and rich color (though black is definitely the base).

I don’t need to tell you that sexy witch costumes are hugely popular in the mainstream. I think woman just want to be more sexy than they can when at work or mothering or in other roles. Halloween is an opportunity to be sexy. Google “sexy witch,” and you’ll see hundreds of sexy witch costumes available from stores.

There are multiple inspirations for the sexy witches costumes. From Morticia of The Adams Family; Elvira, Mistress of the Dark; Lily of the Munsters: Siouxsie and the Banshees: as well as the popular Sabrina the Teenage Witch. Actress Melissa Joan Hart wore a regular high school student clothes on the last show. However, in this studio shot, she shows off a pretty elaborate sexy witch ensemble.

This is where anything black and slinky will help you out. Or a short black skirt with fishnet stockings. It’s not a bad idea to bring along a cover-up, though, for on your way to or from the party (a Raven Fox velvet cloak might be just the thing and can be found here).

Glinda is obviously quite different than our other witches because her costume is a light and sparkly ballgown. She first appears in Baum’s classic children’s novel The Wonderful Wizard of Oz (1900). In the 1939 film version of The Wizard of Oz, Glinda is a composite character. She’s Good Witch of the North and Good Witch of the South, but also the novel’s Queen of Field Mice, by being the one who welcomes Dorothy to Oz, sends her “off to see the Wizard,” and orchestrates her rescue from the deadly poppy field in addition to revealing the secret to going back home.

Over the last 100 years, Glinda has appeared in numerous books, movies and musicals such as Wicked, Once Upon A Time, Emerald City and Dorothy and the Wizard of Oz.

For a good-witch costume the base color is usually white, accented by gold or silver touches. For motifs, think of stars and butterflies rather than spiderwebs and pentagrams. Glinda is shown with a crown, but a tiara is also common for good witches, or a traditional pointed hat in white.