Fairytale Photos with a Living Bear 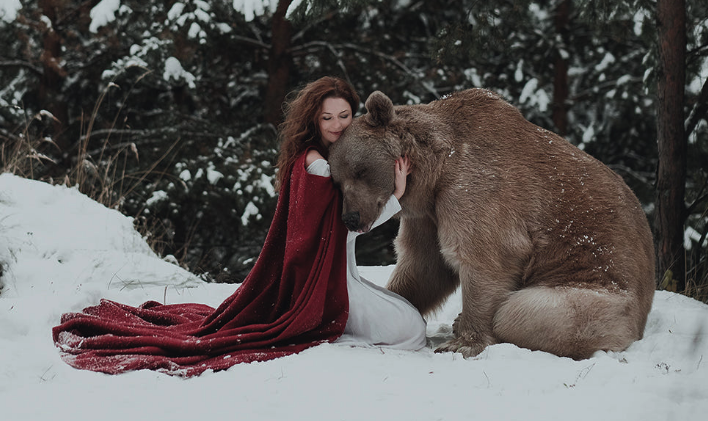 Remarkably, young female models in long cloaks and medieval dresses, kiss, cuddle, or sit on top of an enormous bear.

Moscow-photographer Olga Barantseva has always loved the forest and wildlife. In 2012, she combined her passion for the forest with her interest in portrait photography, when she started creating mesmerizing and fairytale-like photos. Models pose with wild animals, such as Stepan, a 1,500 lbs., 7 foot bear. Other Olga photos include wolves, raccoons, ravens, owls, crocodiles and snakes.

The story goes that Stepan was found starving in the forest as an orphaned 3-month-old cub. A circus trainer raised him. Stepan grew up to be an exceptionally tame bear that couldn’t return to live in the wild.

I find Olga’s photos astonishing. Her models are so young and delicate in contrast to the giant, lumbering bear. Stepan, the bear, and the other animal models appear in movies and photoshoots. Surprisingly, Olga explains that you can rent many tame animals, birds and reptiles in Moscow.

About Stepan, he’s now 20 years old and has appeared in 20 movies and many photoshoots. He eats a diet of fish, vegetables and eggs. He loves human companionship but apparently he’s offered mozzerella and sweet cookies to elicit more cooperation during photoshoots.

In some images, long cloaks envelope the young models. In others, they wear fairytale or medieval dresses or almost nothing such as a leotard. The model looks like Rapunzel with her long braid and a white or yellow cream vintage gown. The bear and girl enjoy tea and pretzels and the bear licks her face — as he does in many images. The lick or kiss, makes the model look so vulnerable. Is he going to eat her face?