Hooded Medieval Cloaks and Capes — Fashion in the Middle Ages 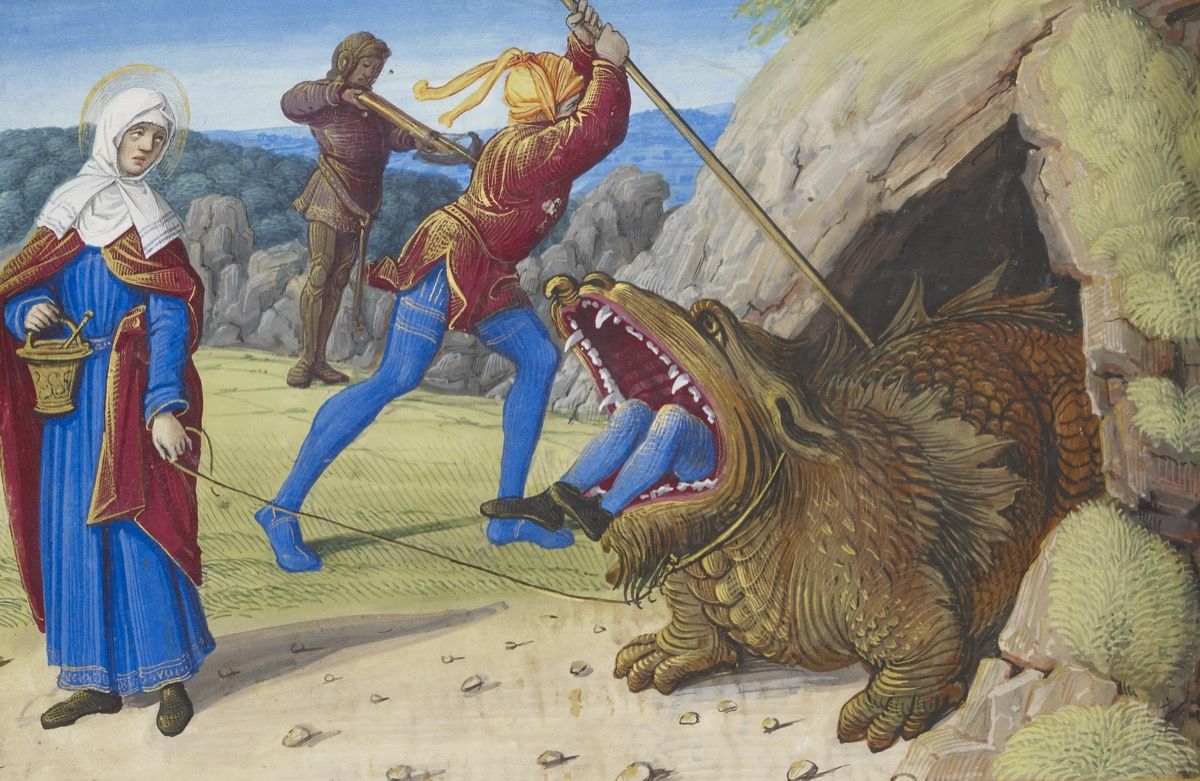 In early Medieval times people wore pretty much the same simple stuff, regardless of their income or profession. Thanks to feudalism and warring city-states, trade was nearly non-existent. Thus fabric and clothing were made locally and only a limited variety of either was available.

Dress looked much like what the Romans had worn; a t-shaped tunic with sleeves, leggings, and a loose rectangular cloak. English nobility and royalty intentionally modeled themselves after the Romans to portray themselves as the successors to Rome and the chosen people. Most garments for the upper classes were made out of two fabrics: a linen undergarment and a woolen top garment. The wealthy added local stones and uncut jewels to their attire to distinguish themselves from peasants.

In the early Middle Ages, fashion wasn’t much of a thing because of the many robbers, thieves, and murderers on the roads. Also, the roads were in disrepair. Thus, fear or murderers and impassible ruddy roads deterred trade.

However, by the mid – to late – 11th Century, a number of things changed. The power of Kings and Nobles increased. They fixed the roads; not them personally — they got the peasants to do the repairs. I hope they paid them. And lawlessness decreased thanks to knights-in-armor. The free movement of carts and wagon on the roads of England commenced. An abundance of fabrics, colors and fashions became available to the wealthy and how one dressed came to denote ones wealth and status. According to my sources, fashion in the West started thus.

In the 12th century women’s and men’s fashions started to change quickly, some trends lasted months or a year or two. Other fashions lasted decades.

The word ‘novelty’ appears for the first time in the 12 century and from then on frequently in reference to clothes! Silk was reintroduced to Europe as well as imported from the East. Tailoring was also an evolving art and textile techniques were becoming more sophisticated and thus clothing became more intricate and elegant. For a time, people were using lacing to make tighter clothes. Later, they learned to make better armholes and sleeves, fitted waistlines and necklines, utilize buttons, and add gold and silver threads to fabrics, etc.

In the 12th century one sees a lot of novelty with cloaks as well. Cloaks of different lengths and widths are created. Lining cloaks with fur and other splendid fabrics comes into vogue as well as embroidering or otherwise embellishing the hems.

The book I consulted, “Everyday Life in the Middle Ages, The British Isles from 500-1500” by Sherrilyn Kenyon, divides the times into multiple eras and provides details on different aspects of clothing. We’ll focus on hooded Medieval cloaks and capes, fabrics and colors.

The word russet refers to a coarse cloth made of wool with a subdued grey or brown shade. In fact, a statute in 1363 required poor English people to wear russet or cheap blankets. Franciscan priests also wore russet as a sign of humility.

Medieval nobility and royals wore an abundance of bright colors. No doubt it distinguished them from the poor who had nothing but gloomy russet. It also might have been a novelty they embraced as almost everyone wore russet before the 12th century.

1087 to 1154 A.D.
A new cloak from the East called a palisse was introduced. It was short and coat-like and hung just below the knee. It fastened at the waist.
Fabrics: Nobility enjoyed finer weaves of silk, linen and wool.
Colors: remain similar with the addition of blue: Red, green, light blue, blue, gray, yellow, red-brown, brown and black.

1154 to 1199 A.D.
Cloaks remain the same as before, only woven with heavier material.
Fabrics: Scarlet is new. Lots of silk, linen, wool as well as heavily embroidered cloth. Lower classes wore a coarser grade of wool and russet.
Colors: remain similar with the addition of scarlet and watchet: Green, yellow, twany, red, red brown, black and gray.

Scarlet plays a major role in fashion of the Middle Ages and refers to both the color and a particular fabric. When the Roman Empire crumbled, the early Christian church adopted many of its symbols including the color scarlet for important people and events.

The Crusaders carried a flag with a white background and scarlet cross — the scarlet symbolizing sacrifice and blood. Before 1295, Cardinals wore red robes of a purple tone. This red came from murex, a mollusk, and was the same red worn by Byzantine Emperors. This red (with a purple tone) because unavailable after 1453 when the Turks took over Constantinople. Cardinals then selected scarlet made with a dye called Kermes (from an insect that lives on Kermes oak trees.)

Now the other scarlet. Scarlet was also a type of fine and high priced luxury woolen broadcloth. Kings, princes and the wealthy, gravitated to scarlet partly for its color and partly for its high price. Though other fabrics might be dyed scarlet, this particular woolen broadcloth, was called scarlet. It was woven of the finest English wools, and always dyed with kermes. This scarlet cloth was extremely fashionable in the fourteen and fifteen century but faded from popularity in the sixteenth and seventh centuries.

1199 to 1272 A.D.
Cloaks become more luxurious and are now lined with fur and embroidered. A minirer-lined cloak is popular; minirer being a solid white shield-shaped fur edged with grey from N. European squirrel. The very wealthy and royals imported more refined furs from the East such as sable, etc. The English Royal family linked their clothes with fur even in the summer to show their status.
Colors: Purple and murrey are new; most popular colors were red and green.

1272 to 1307 A.D.
Long, full cloaks come into fashion. The material continues to be heavier or lined with fur or a lighter fabric. Buttons start to replace other fasteners.
Fabric: Velvet appears and is reserved for royalty only! Fastian, a silky, velvet-like material is used for lesser nobility. Scarlet, wool and linen are popular as before. Serge, also new, is used for outer garments.
Colors: are similar to before but slate replaces black.

1307 to 1327 A.D.
Coats of arms are sometimes added to the cloaks.
Fabric: A couple of new fabrics appear, taffeta and kersey. In addition to velvet, scarlet, fustian, linen, wool, russet and canvas.
Colors: Silver and gold colored fabric appear but only royalty are allowed to wear them.

1327 to 1377 A.D.
For state functions, people start wearing a narrow cloak fastened with silken cords or broaches. Otherwise, hooded Medieval cloaks remained the same. Colors and fabrics are mostly the same. A reddish orange and a bright tan color are introduced.

1399 to 1413 A.D.
For state functions people start wearing a wide and circular cloak fastened with silken cords or broaches. Coats of arms embroidered on the back becomes popular. All nobility wear velvet. Fabrics and colors remain the same.

1413 to 1422 A.D.
The purposes of cloaks changes a bit. Narrow cloaks are used for court and state. Full, hooded Medieval cloaks are for travel. A new fabric called Lawn is introduced in 1415.

1422 to 1461 A.D.
Capes fall out of fashion for state functions. Hooded Medieval cloaks for travel and other occasions are worn full. Another new fabric Damask is introduced!

In the 13th century, clothing becomes more and more decorative due to the demand for novelty and the desire by royals and nobility to make a display of their wealth. That is, decorative to the point of impracticality! Long men’s shoes with exaggerated pointy toes, long robes that make it hard to walk, enormous-to-the-ground sleeves with giant scallops. (Add a photo here.)

Alas, things end badly. Not because of extravagant fashions, but because the good times always come to an end. During the 12th and 13th centuries the population of Europe expands dramatically for a variety of reasons including warmer climate, increased agriculture production and peace times. However, this is followed by a mini-Ice Age. Food production dips and the black plague sweeps through Europe killing a third of the population.

How do we even know what people wore in the Medieval Ages — the 11th, 12th and 13th and 14th Centuries? Unfortunately, very little clothing has survived from this time. Thus, our information comes primarily from illuminated manuscripts and sacred texts and a variety of documents like an inventory of fabrics for a wealthy household and people’s wills.

A little more about colors and dyes: For regular folks, wool was homespun at home by the women from the sheep’s wool. People made dyes from plants, roots, lichen, tree bark, nuts, crushed insects, mollusks and iron oxide. Colorful clothing was worn by all classes of people and virtually every color was available. Dyed fabric was mixed with a substance called mordant to prevent fading. Fabrics of the brightest and richest colors cost more because they either required longer dyeing times or more expensive dyes. Thus, the nobility and the very rich selected the boldest colors in addition to most expensive fabrics as displays of wealth and privilege.

Where I say only certain people could wear certain fabrics or garments, I’m referring to sumptuary laws.

The word Sumptuary derives from the Latin word for expenditure. Laws dating back to the Romans restricted ordinary people in their expenditure; in other words, limited what they were allowed to purchase or expend money on.

English Sumptuary Laws might apply to a variety of goods including clothing, jewelry, food, beverages, and furnishings. These laws started in 11th Century and increased with each Century. There were also laws and customs that prescribed specific colors, garments, or even hair cuts for specific professions, like clerics had to wear their hair short, and educators and scholars wore black hooded medievalcloaks and robes. Obviously, these laws made it so one’s class was evident and easily distinguished and maintained specific class structures. Penalties for violating Sumptuary Laws could be harsh – fines, the loss of property, title and even life.

In summary, the entertaining part of medieval fashion is how Western fashion got its start in this epoch. A stunningly myriad of styles, fabrics, embroidery, and even tailoring techniques were introduced and evolved. On the flip side, because fashion was expensive, it was used to denote and divide classes. At first, it divided the poor, from the wealthy and royals. Later, it was used to finely divide classes into multiple strata and even distinguish specific professions.