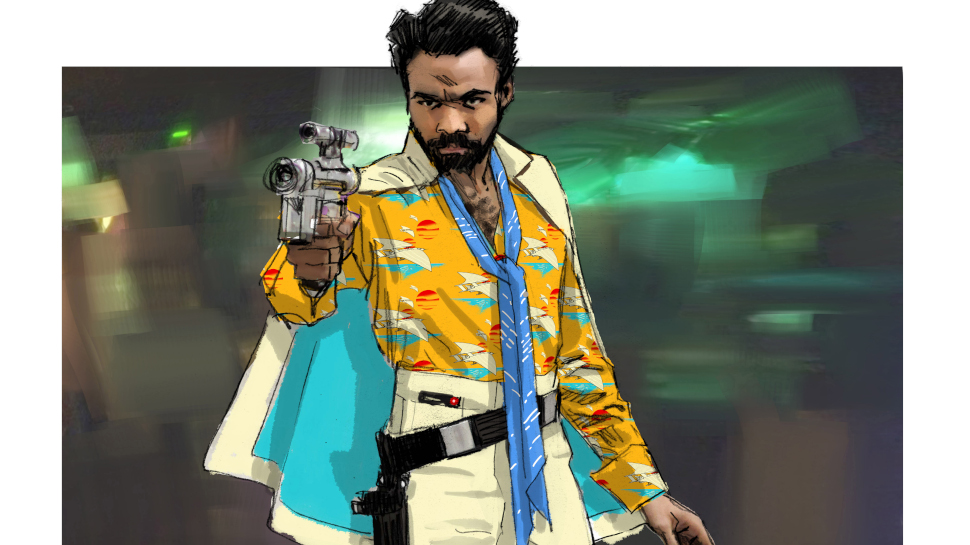 SOLO: A Star Wars Story is a cape lover’s dream come true. As we reported recently, Lando’s capes are a bountiful collection which he stores in a special closet in his private quarters on the Millennium Falcon. The only thing better than seeing the movie would be hanging out in Lando’s cape closet and luxuriating in the silk, and velvet capes.

Let’s dive into how the capes, cloaks and costumes for the movie were developed by SOLO costume designers Glynn Dillion and Dave Crossman. And also talk about our favorite capes!!

The inspiration for Lando’s Capes

Costume Designers Glyn and Dave didn’t set out to create a whole closet full of men’s capes but say Lando’s expansive cape closet kind of happened over the making of the movie, and then became part of the movie marketing.

In the end, they made more than 30 luxurious men’s capes, as well as 30 shirts, 20 scarves, accessories, and shoes. They tried to mix the textures and patterns, so there are silk, wool, fur, and leather capes.

As costume designers their job was to make Lando look incredible onscreen. They more than succeeded, as Lando’s capes became one of the most talked about aspects of the film. 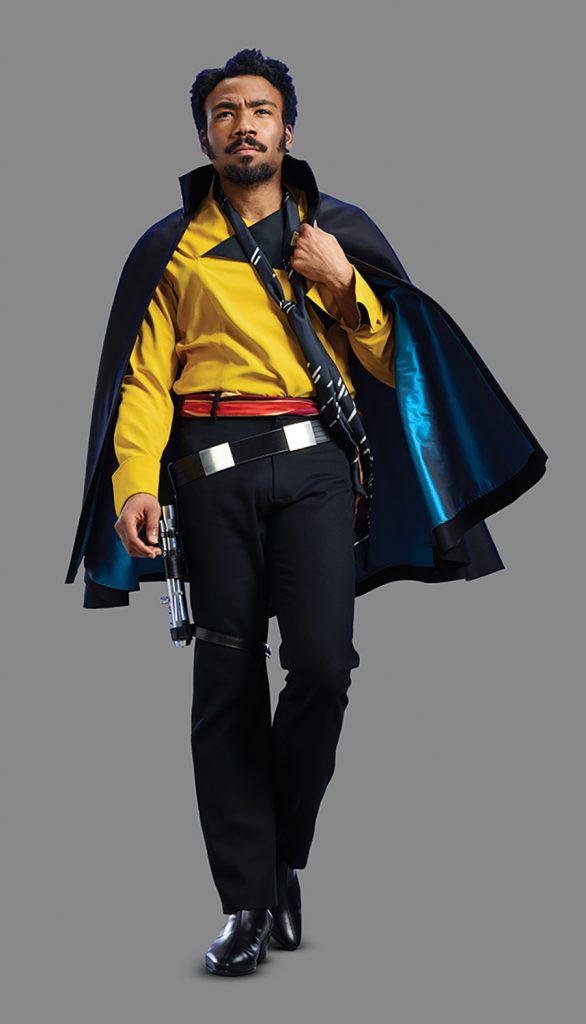 The Design Ideas for Lando’s Capes came from Musicians such as Hendrix, Marvin Gaye, James Brown and Prince

In particular, there was one picture of Marvin Gaye that influenced their approach to the men’s capes. I don’t know if this is the right photo, but it certainly could have been! I found a whole treasure trove of Marvin Gaye photos in which he wears a black raincoat. And take note of the yellow shirt poking out and the yellow lettering.

The designers thought of Lando’s wardrobe as aspirational—he dresses for the position he wants to have, not the position he has now. They wanted to suggest he’s the kind of guy who spends all his money on his wardrobe.

“Aspirational” is a theme for the movie overall. Han Solo and Qi’ra start their lives in the abject poverty and powerless circumstances of Cordelia and struggle to make their way to freedom. Most of the characters they meet on their journey are also striving to escape the Empire and make a life for themselves.

Third, the colors in the movie get brighter as the movie goes along. The characters start in dark and dank Cordelia and gradually make it to a brighter world.

A lot of the first part of the story takes place below ground and in muddy trenches. The middle third of the movie is above ground, mostly on spaceships like the Millennium Falcon. The end of the movie takes place in the blazing sun in a sandy town and an ore processing plant. 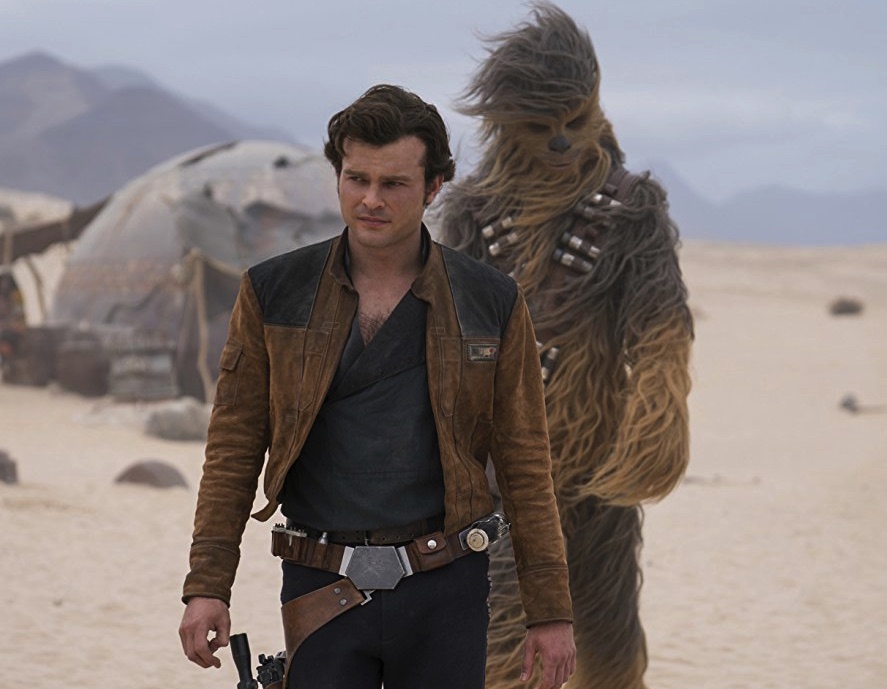 In The Empire Strikes Back, capes were a stand-out part of Lando Calrissian’s original wardrobe. The studio photos show Lando, played by Billy Dee Williams at the time, in a light blue cape with a gold lining. In SOLO, young Lando wears a modernized version of that same men’s cape.

I’m referring to the first photo in this post. Lando’s cape is a deep blue cape with a bright blue satin lining. Its’ paired with a bright egg yolk yellow shirt that looks modern among the other darker colors in the movie. When we first meet Lando he’s playing cards in a smoke-filled room, but his shirt makes him stand out from the other card players in the dark space! 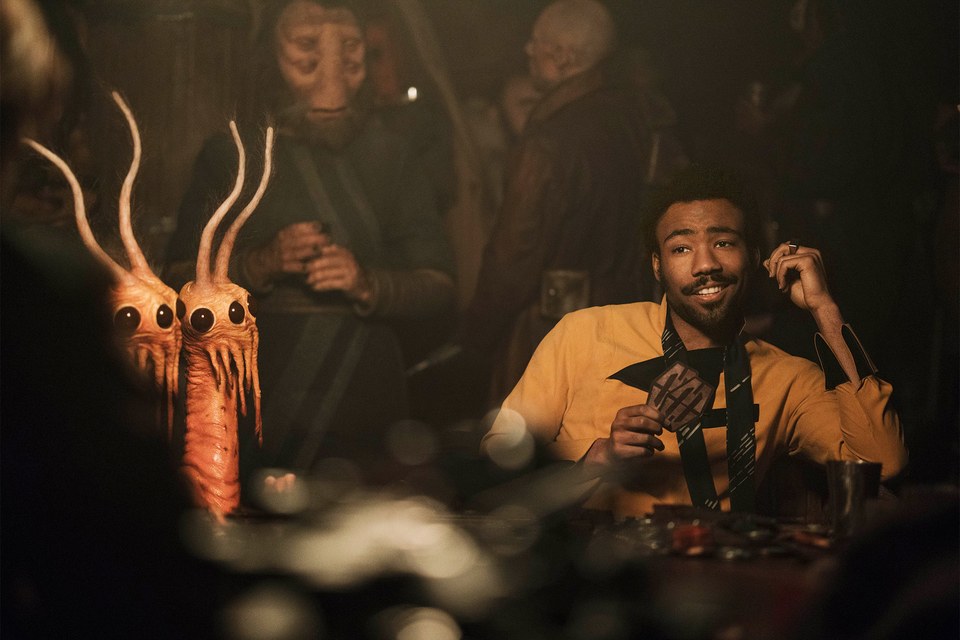 Qi’ra looks totally badass and intimidating in this red and black cloak she borrowed from Lando’s cape closet. The crimson red contrasts with the blue-toned military metallics around her and plays off the red taillights in the background. Costume Designers Glyn and Dave say that while the cloak belonged to Lando, it was made for Qi’ra. They knew she’d be wearing it in this scene. (As an aside, most costumes were likely not written into the script, but something like this cloak of Qi’ra’s would have been.)

Shortly after, she uses the beautiful black and red cloak to put out a fire on the Millennium Falcon, though Lando asks her to stop. Not being able to stop here, must have killed him. Such an appreciative friend, Qi’ra. 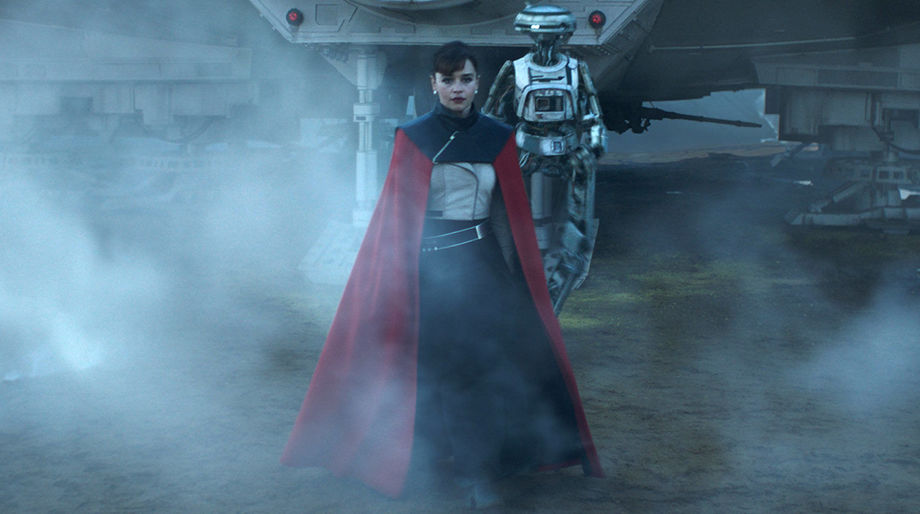 Donald Glover has revealed that this is his favorite cape. And of course, his taste is impeccable!

It’s a white men’s cape, with a modest (for Lando) collar and a sleek silhouette. In this outfit, a different yellow shirt and the scarf are doing the heavy lifting, rather than the cape. The pattern on the shirt and scarf are based on artwork from previous Star Wars movies that designers Glyn and Dave transformed into abstract images.

The cape’s white color contrasts beautifully with the loud shirt. And the cape has a gorgeous bright blue lining and short stand-up collar. It’s a light and airy summer cape. Its entire purpose is to provide style, and thus this cape is purely “a cape for cape’s sake”. 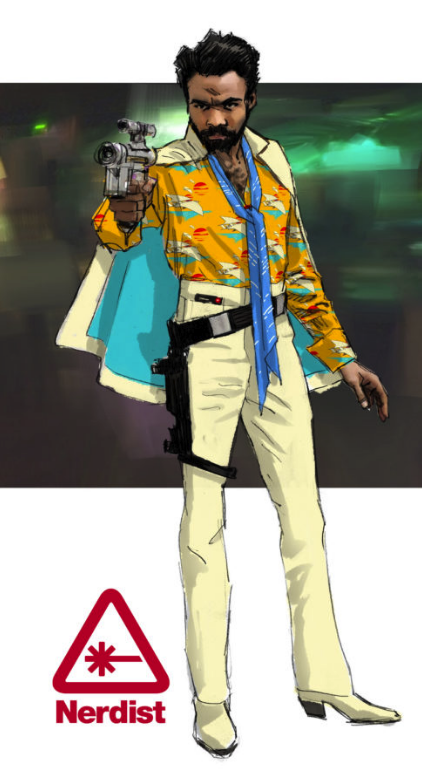 I’ve focused a great deal on color in SOLO: A Start Wars Story as it’s relevant to Lando’s costuming and adult capes. However, looking at the costumes overall, color is less than half the story. In the Star Wars series, the costuming look is military-inspired, Vietnam-inspired with some Japanese influence. In SOLO, the costume designers leaned into previous Star Wars movies to provide continuity when they created costumes for new characters. Check out the camo cape Val is wearing! The gun worn strung around Val’s neck is based on images from the Viet-cong war.

“Val has to be a little bit more practical in her look,” explained Glynn Dillon. They took inspiration from female political activists for Val’s outfit and added hydraulics and accessories that play into her specialist skill of climbing. They also gave Val a backward apron skirt, something that’s never really been done before in a Star Wars film. Check out the military green with the 3 touches of red from her scarf or turtleneck, armband and the climbing rope. 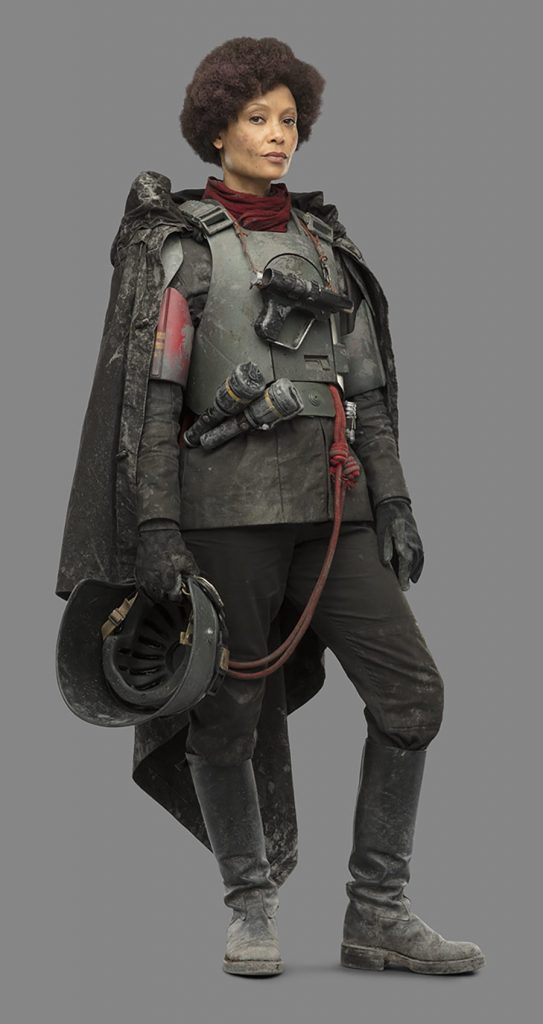 What is it that makes us love capes so much?